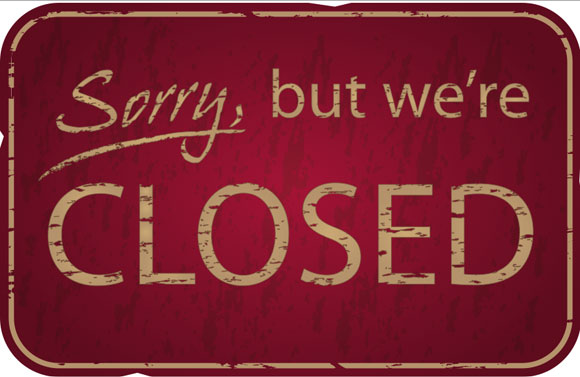 Emurse, a company in the increasingly hot recruiting and job search industry, is being shuttered by AOL. AOL bought the online resume site in mid 2009, but has done effectively nothing with the service, and now as part of the company’s increasing attempts to narrowly focus where it can add value, is shutting it down. 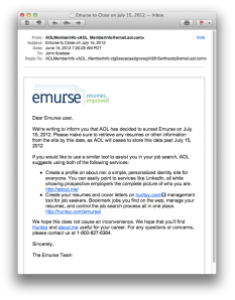 Emurse allowed users to post resumes online in a variety of different formats, and then track who viewed them. Today, the site displays this message at the top:

“The Emurse website will be sunset on July 15, 2012. Please make sure to retrieve any resumes or data from the site no later than July 15, 2012. If you would like to use a similar tool to assist in your job search, AOL invites you to try about.me or huntsy.com. For additional details, click here.”

In partial explanation, AOL announced that the company will be focusing on more popular features and sites, and that Emurse was a victim of this consolidation. Those sites are in the same general job search and personal introduction vertical as Emurse.

About.me provides users with a one-page introduction and overview of themselves to the world, and Huntsy is a job-search management tool. All the data that users have in Emurse can be migrated to Huntsy, if users choose, but if they do not act before July 15, the data will be deleted.

Co-founder Alex Rudloff announced the acquisition three years ago on the Emurse blog. The notice said all the right things that founders say when their companies are acquired:

“We’re very excited to announce that we have been acquired by AOL.” He finished the blog post by looking forward to a bright future: “At this point, Emurse has helped millions of visitors from all over the world. I can’t wait to help millions more :).”

The site’s traffic has been dipping lately, and is only a tenth of a major competitor, ResumeBucket. 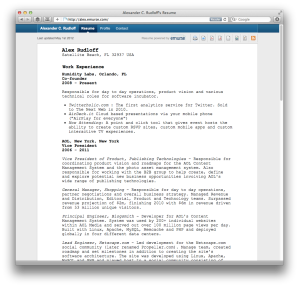