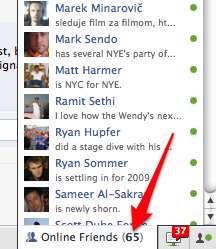 AOL is thinking about launching a service that integrates AIM, its instant message service, into other sites, as we reported earlier this month. However, sources close to the company are saying the plans are still in Powerpoint — AOL has just been showing mock-ups to potential partners.

Conceptually, it’s an interesting idea. The plan could make once-dominant AIM — and Bebo, its recently-purchased social network — more central to the web. The service could let users on another web site chat with each other, based on their  connections on that site. Lets say you’re on your favorite social network (one that doesn’t already offer a chat service). You’d be able to chat with people you’re already friends with. A toolbar at the bottom of the screen would show you which friends were online, you’d click on a person’s name to open a window and start chatting with them. By using AIM, the service could theoretically integrate your existing AIM contacts with your social network contacts.

Because AOL’s plans are still, well, being planned, the service could end up being something more minimal. One possibility, a source says, is that another site could just enable AIM chat without integrating social connections on other sites.

The plans, we previously heard, could also include some sort of integration with Bebo, based on the social network’s recently redesigned “social inbox.” The redesign lets you share what you’re up to from around the web with your friends on Bebo.

That’s the thing. AIM still has more than 80 million users, but it faces increasing competition from other chat tools, like Google’s Gtalk, Yahoo Messenger, Microsoft Live Messenger, as well as new rivals like chat services offered by leading social networks Facebook (pictured) and MySpace. Bebo, meanwhile, has more than 90 million total users, but only around six million are in the U.S. — and AOL bought it last spring for $850 million. AOL needs to preserve AIM’s market position, and justify its acquisition of Bebo. The clock is ticking.