EA and Respawn surprised everyone by keeping the 21-month project a secret for so long, as it had no prelaunch press or leaks until the past weekend. And it turned out this surprise game, set in the Titanfall universe, is a lot of fun to play.

I played it for a few hours last week at a preview event that Respawn hosted in Hollywood. I had a lot of fun, even though I had trouble remembering to do things in the matches. One of the big things I forgot most was using my ultimate power, as I was often focused on just trying to collect things and stay alive.

I switched machines a couple of times due to some bugs. But for the most part, the game ran smoothly on the PCs that I played on. You’ll notice there’s no long loading at the beginning of a match. 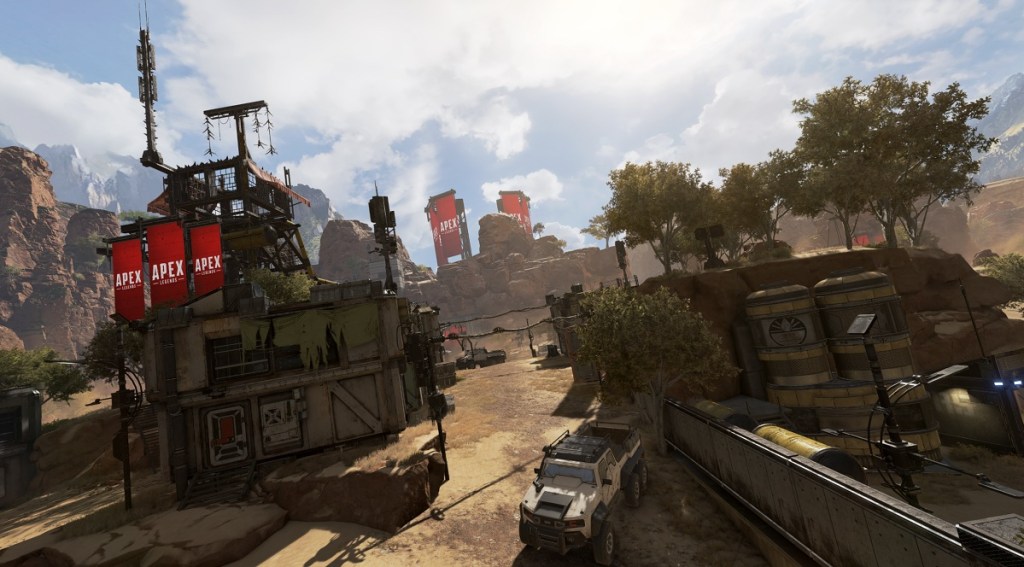 Above: The Apex Legends map Kings Canyon has a lot of places to hide.

Other games wait for a lobby to fill up with 100 players. While some of that happens, the start times for the game were much quicker last week than other battle royale games I’ve played. We’ll see if that continues today, as just about everybody tries to get into the game.

I enjoyed my sessions, and I hope the launch goes off without a hitch, because this game has a few innovations that others don’t have — like being able to take a downed teammate’s tag, or banner card, to a respawn beacon (which glows green on the map) and reviving the player. This keeps your teammates from bailing on the game as soon as they’re shot, making for better camaraderie.

Here are our videos from the gameplay sessions last week:

I played Gibraltar, the tank character who has a dome shield. I was jumpmaster and tried to take us to a remote part of the map, albeit one without much loot. It took me a long time to get a decent gun, and that can be deadly in this game as you rush around for stuff. The fighting didn’t last for long, as I had no idea where the attack came from.

I played Gibraltar again, and we chose to go as far away from the hovertank, which has good loot, as possible. I got shot while trying to restore my shield. Lesson: Try to shoot the other guys before you do that out in a hot combat zone.

Gibraltar again. We landed close to water this time. I shot one guy but got hit in the back while I was trying to loot my prize.

More Gibraltar. I don’t know why I was stuck on that guy. I went down quickly and got executed in an embarrassing way.

Played as Lifeline, the medic, who has a big shield and can heal others quickly. We picked a spot far away, and I tried to get there by diving and rising a lot, but we fell far short. I was nervous because it took a long time to find a gun. Got ambushed from the side while trying to head to a downed teammate.

We did surprisingly well in an early firefight, taking down two enemies. It paid to stick together. I got shot, and my teammate tried to take me to a revive beacon. But no such luck.

We’ll have more on Apex Legends as we dive into it and talk more to EA and Respawn.