Mobile game and app spending will grow 25% to $112 billion in 2020, according to year-end estimates from mobile data and analytics researcher App Annie.

This shows that big companies, brands, and game makers have to focus on mobile in order to ensure their future growth. It’s no surprise that mobile grew in a year when COVID-19 gripped the world and transformed our lives. But it’s enlightening that gamers and other consumers turned to mobile devices when they were stuck at home and had access to other devices such as consoles and PCs. That’s a testament to the convenience of mobile, said Amir Ghodrati, the director of market insights at App Annie, said in an interview with GamesBeat.

At the height of the pandemic, our mobile use has sky-rocketed and accelerated the adoption of mobile by two to three years, he said. The report estimates good results for the month of December, but App Annie will likely revise its numbers once the month is over.

“There are more ways that you can engage with mobile,” Ghodrati said. “We expected downloads and usage to go up, but the consumer spending was always the question mark here, with the [pandemic recession]. With everything going on, people still continue to spend on mobile. We thought there was a good opportunity for things to be strong, but we’re definitely very interested in seeing these results.” 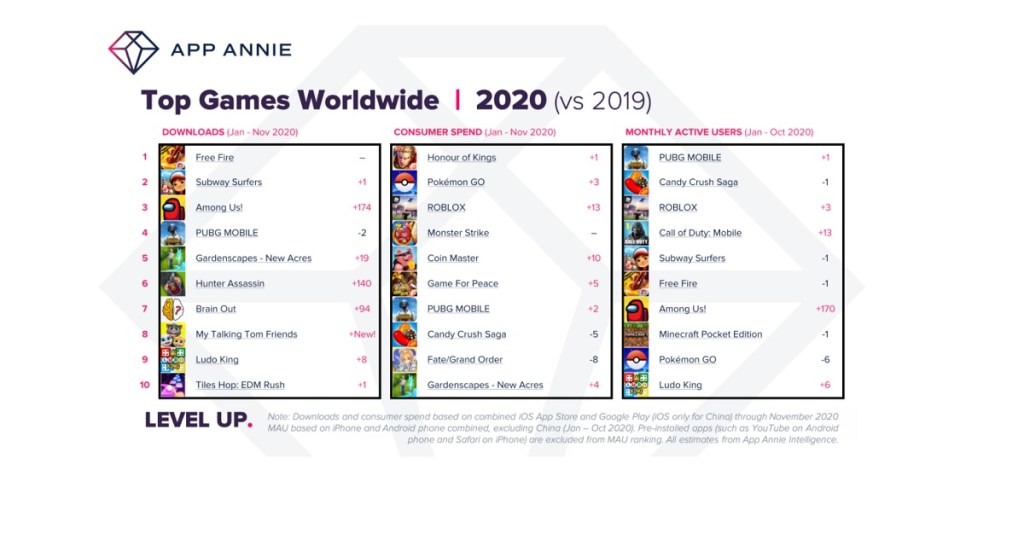 Both iOS and Android hit new heights. While 65 cents of every dollar went to iOS, spend in Google Play will grow close to 30% in 2020.

In gaming, the standout successes were Among Us, My Talking Tom Friends, Roblox, and Call of Duty: Mobile. My Talking Tom Friends was one of the few new games to penetrate the top-10 lists. Roblox also broke into the top 10 apps by consumer spending in 2020. Call of Duty: Mobile surpassed nearly a billion hours on Android phones in the peak month of its first year (October).

“Talking Tom has a very strong franchise and so you would expect that success, but Among Us was a surprise breakout success, even though it had been around for a while,” Ghodrati said. “That success was due in part to influencers and people boosting it on Twitch.”

Another surprise is that Pokémon Go was very resilient, given that it’s a game where people walk around a lot and meet other people. The lockdown forced developer Niantic to pivot the game so it could be played social-distanced and remotely, and that helped it hang on to a high position on the rankings, Ghodrati said.

After things settle down, the vaccines are widely distributed, and things get back to “normal,” we’ll likely see a decline in mobile games, Ghodrati said. But so far, that hasn’t happened yet.

“We expect it to level off at a level that is higher than what was predicted before. Even if there is a slight dip, it’s still going to be noticeably higher than it was before,” he said. “People are spending time in these devices, and we’ve got new types of games that will only speed up the engagement with mobile.”

In terms of categories, 71 cents of every dollar went to games across iOS and Google Play combined — with spending accelerated by this year’s boom in mobile gaming. Among nongaming categories of apps, in-app subscriptions drove the most growth. Top categories for growth were games, photo and video, and social networking on iOS. On Google Play, it was games, entertainment, and social.

Mobile app and game downloads will hit 130 billion across iOS and Google Play in 2020, up 10% from a year earlier. COVID-19 catalyzed demand for digital solutions. Google Play grew faster overall, outnumbering iOS downloads by 160%. But both app stores grew 10% in downloads overall.

The total time spent rose 25% to 3.3 trillion hours on Android phones in 2020. Business app usage was up 200%, thanks to conferencing tools like Zoom Cloud Meetings. Tik Tok grew dramatically and it is set to break into a billion monthly active users in 2021. Disney+ grew dramatically and ranked fifth in consumer spending among non-gaming apps in 2020, thanks to shows like The Mandalorian and Mulan. Time spent in games on Android phones was up 35% compared to 2019.

As you would expect, commerce apps have been strong in the holiday season.