Mobile apps and games have had a very big decade, and App Annie has some data that tells us what we’ve been obsessed with for the past 10 years. Netflix is the No. 1 app of the decade in consumer spending, while Clash of Clans took the No. 1 spot for consumer spending on games, according to mobile market data and analytics firm App Annie.

When it comes to downloads, Facebook was the No. 1 app of the decade, and Subway Surfers was the No. 1 game of the decade. Mobile was at the heart of behavioral and cultural changes in the past 10 years, and these top apps and games reflect that, said Amir Ghodrati, director of market insights at App Annie, in an interview with GamesBeat.

Throughout the 2010s we saw our world transform. We can now rent other people’s homes instead of booking a hotel (Airbnb), have food delivered from any restaurant we choose instead of just those that offer delivery (Deliveroo), and play console-quality games when we’re on-the-go (PUBG Mobile). Mobile has been at the heart of every one of these changes by giving consumers a window to the internet in the palm of their hand, App Annie said 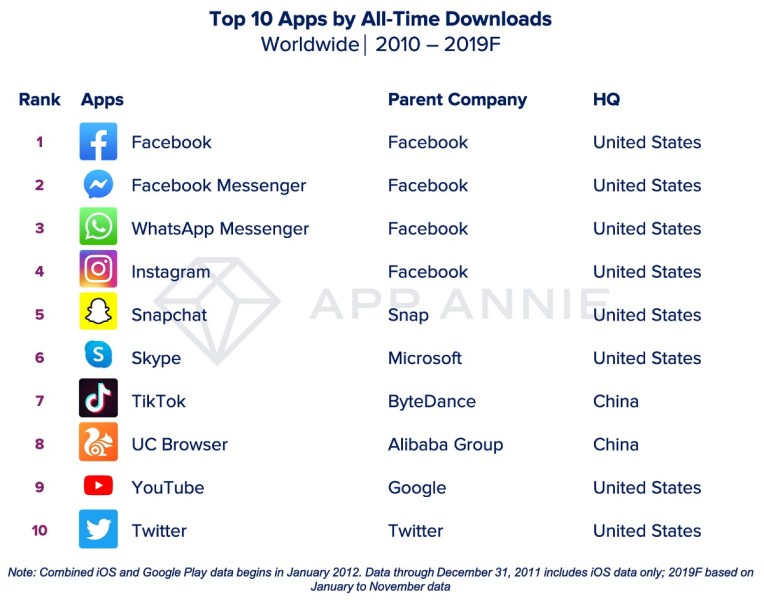 Communication and social media apps are consumer favorites, accounting for seven of the top 10 apps by downloads this decade. In terms of consumer spend, video streaming and music apps were well represented with Netflix, Pandora Music, and Tencent Video all appearing in the top five. Tinder was the most successful dating app of the decade in terms of consumer spend, coming in second place in the overall ranking behind Netflix.

“For nongaming apps, they were definitely the first ones to go big on the subscription model,” Ghodrati said. “You saw that with Netflix. With games, there was a focus on spending in games with virtual goods. The free-to-play model took off with games. Now games are starting to catch up with subscriptions like Apple Arcade.” 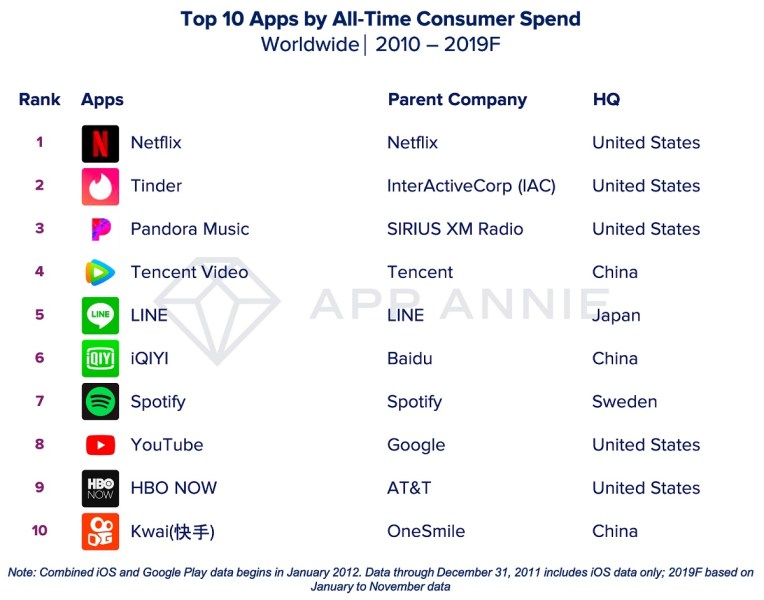 Above: Top apps of the decade by consumer spend.

In many cases, Ghodrati said that games and apps aren’t competing with each other.

Subway Surfers was the most-downloaded game 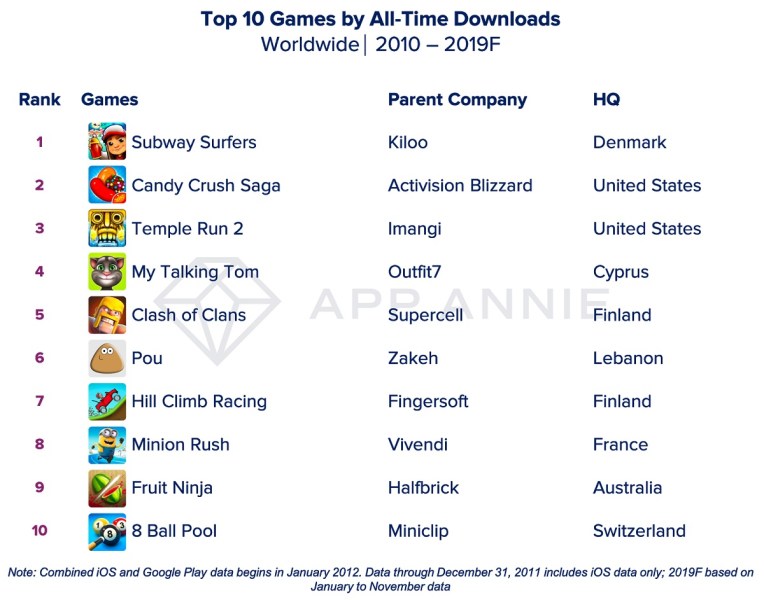 It surprised me to learn that Subway Surfers had so much traction as the top downloaded game of the decade, driven by its strong adoption in India. This accounted for over 15% of its all-time downloads (iOS & Google Play combined).

Success came from many different places as each of the most downloaded games came from a different company. Clash of Clans and Candy Crush Saga stand out as the only two apps to appear on both the top apps by downloads and consumer spend lists. Monster Strike, Puzzle & Dragons, and Fate/Grand Order rounded out the top five apps by consumer spend for the decade.

“Games tend to be at the forefront of innovation,” Ghodrati said. “The first ones that tend to develop apps for publishers, they take advantage of newer technology. When a market starts becoming bigger and starts downloading, gaming apps tend to be the first ones that people start downloading more, and then they open up to other things. Over time, they tend to be a lot more scalable, just in terms of different markets to play the same gaming app.” 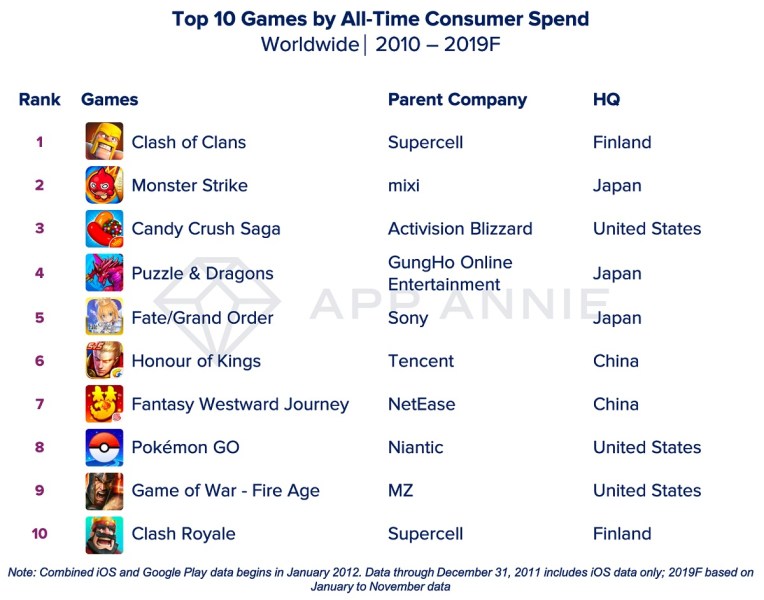 Above: Top games of the decade by consumer spend.

This decade has been a time of remarkable growth for the mobile economy. With a 5% increase in downloads, and 15% growth in consumer spend (excluding third-party Android) year-over-year in 2019 this looks set to continue in 2020.

I wondered if the list would logically be dominated by apps that appeared late in the decade, as that was when the momentum for mobile really gathered steam. But Ghodrati said there was plenty of representation of apps and games that appeared relatively early in the decade, like both Facebook and Subway Surfers.