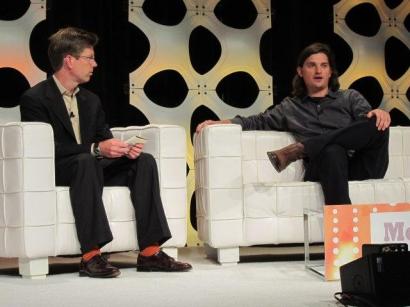 With App.net, developers can sign up for a platform of tools to refer to their apps in different contexts including Facebook, Twitter, Google+, email and SMS.

Dalton Caldwell, founder/CEO of Mixed Media Labs, spoke today at MobileBeat 2011 in San Francisco. When asked how Apple and Android are responding to App.net, he replied they shouldn’t worry, “this is just a distribution layer to drive traffic into existing app stores.”

The App.net concept is similar to that of About.me, which provides a personal profile page that directs visitors to all of your personal online content.

“The idea is to ‘close the loop’ when referring to their rate rather than just sending clicks into a black box and hoping app installs come out the other side,” writes Caldwell in his company blog. “The App.net platform allows developers to get analytics into all of these marketing channels.”

Caldwell and Bryan Berg started Mixed Media Labs with the goal of iterating several products and concepts very quickly. In February 2011 they announced an application programming interface (API) for developers to build apps using mobile photo service Picplz. While working on Picplz, they ran into the problem many app developers face: the difficulty of driving traffic from a website to a mobile app.

“There are tried and true practices for distributing and monetizing websites through analytics, A/B testing etc. that simply do not apply to mobile apps,” Caldwell writes in his company blog. “So we began working on some technology to solve this issue for ourselves last year.”

Mixed Media Labs decided “by several metrics” that the best way to move forward was to spin Picplz off into a separate, standalone company. They could then focus on App.net, something Marc Andreessen, a Mixed Media Labs board member, wanted them to do quickly. Andreessen is a well-known investor and software engineer known as co-author of Mosaic, the first widely-used web browser, and a co-founder of Ning, which provides a platform for social-networking websites.

“Marc has a strong personality,” said Caldwell during MobileBeat, mentioning he likes that about Andreessen. “Ambivalence at the board level isn’t helpful. Mark basically said ‘App.net? Yeah. Awesome. Do that.’ There was no room to dillydally.”

Caldwell said the more Mixed Media iterated and showed advisers like Andreesen, “the more we realized that we had stumbled onto something fundamental. It’s not often in the life of an entrepreneur that potential customers start demanding you build something so they can pay you money for it, but that is what happened to us,” he writes in the blog.

When designing App.net, Caldwell said, data was the key feature.

“The Apple Store does’t provide analytics,” he said at MobileBeat. He also pointed out that visitors to Apple’s website will find “there are a bunch of exit buttons but only one that will install the app.”

“We’re not trying to build an alternative discovery channel,” he said regarding App.net. “You know how to distribute, but here’s a new tool set.”