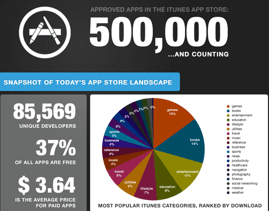 Apple’s App Store, the store in which iPod, iPhone, and iPad users buy and download applications, has surpassed 500,000 approved applications according to a combined estimate by Chomp, 148apps, and Chillingo.

Since its debut in 2008, a year after the company launched the first version of the iPhone, the store has witnessed considerable success amongst developers — paying out nearly $1.4 billion in revenue — and users, who have downloaded a total of more than 15 billion apps.

The three startups, whose businesses operate on the iOS ecosystem, have also put together a comprehensive infographic to surface some of the key statistics from the milestone. Most interestingly, the 500,000 apps were built by 85,569 unique developers, include around 185,000 free apps, and are priced on average at $3.64. Games are the most popular category of apps (15 percent), followed by books (14 percent), entertainment (11 percent), and education (8 percent.)

Among the most popular paid apps are Angry Birds, The Moron Test, Moto Chaser, and Flight Control. According to 148apps, buying every application on the store would require a 7.5 terabyte iPhone and $891,982.24.

In comparison to the App Store, the competing Android Market, responsible for Google’s Android, has an estimated 294,000 applications according to Fortune.

Apple has yet to confirm the milestone, but it will most probably do so at the upcoming Worldwide Developers Conference next month. CEO Steve Jobs is expected to discuss the future of the iOS platform at the event, as well as show off the next iteration of its operating system, OS X Lion.