Appirio, a startup that works to connect the various internet “clouds,” plans to make Facebook more business-y with a new referral management system that will help companies recruit workers, and market and sell products on the social networking site.

The referral engine is basically the business side of Appirio’s user application Refer2myFriends (previously called MyFriends@Work), which allows people to plug their contacts from Salesforce.com‘s customer relationship management (CRM) software into Facebook. Now businesses can tap into those connections as well, and can build their own customized extensions.

Here’s how it works: Let’s say your company wants to promote a specific event, product or job opening. On the relevant page in Salesforce, it would hit the “Publish to Facebook” button, and Appirio would push the listing to everyone who has installed the company’s app — presumably company employees, but also customers and other folks who are part of its community. If you’re one of those users, the app checks whether any of your Facebook friends seem like a good fit for the listing and notifies you if they are. Then if you agree, you can click “refer,” and your friend will receive a message (they don’t need to install anything). Finally, if they accept the referral, they get entered into the company’s Salesforce database as a lead. Here’s a demo video. 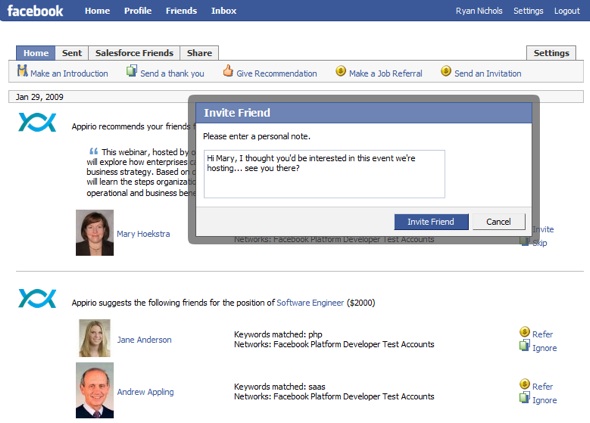 The product has obvious value to any company that wants to leverage people’s social connections on Facebook (and who doesn’t?), but it’s less clear whether users will want to install it. Ryan Nichols, who runs Appirio’s product management and marketing operations, acknowledges that the user app hasn’t exactly taken off; there’s a core of “a few hundred” people who love it and use it constantly, but it hasn’t grown much beyond that. He says Appirio is hoping that the app will attract more users through explicit benefits like referral bonuses, and also through continuing refinement of the user experience to ensure that recommendations are relevant and that users have to do as little work as possible.

Nichols also emphasizes that none of your friends’ Facebook data gets passed to a company until your friend approves the referral. That should alleviate some of the privacy concerns.

Now, there’s a part of me that longs for for the “good old days” of Facebook, when the only people on the site were my college friends. But there’s no denying that companies are already looking for ways to take advantage of Facebook — and the referral engine could make things a lot easier and useful.

There’s some other promising activity around the Facebook-Salesforce connection: Appirio has already been building custom recruiting apps for companies like Dell, and there’s an application called faceconnector (formerly dubbed faceforce) that brings your Facebook contacts into Salesforce. If people succeed in making Facebook a genuinely useful place to do business, that could spell trouble for professional networking site LinkedIn.