After years of life with the MacBook Air, I didn’t think I would like the rose gold 12-inch MacBook that Apple sent me a few weeks ago, with its shallow keyboard, the Intel Core M chip, the single USB-C port, and, oh, that color.

But I was wrong. I’ve come to really like this laptop. The springy keyboard is fun now. The performance isn’t bad at all. I’m proud to use a pink laptop. And it turns out that I can live with the one USB-C port.

Am I eager to see the refreshed MacBook Pro that Apple is expected to release later this year? Definitely. But for now, I can say I’m impressed with this machine, even considering its $1,299 starting price.

The next MacBook Pro is expected to be modeled after this 12-inch MacBook, and there are good reasons for that. This is a stunning device that weighs so little that you never think twice about taking it somewhere. 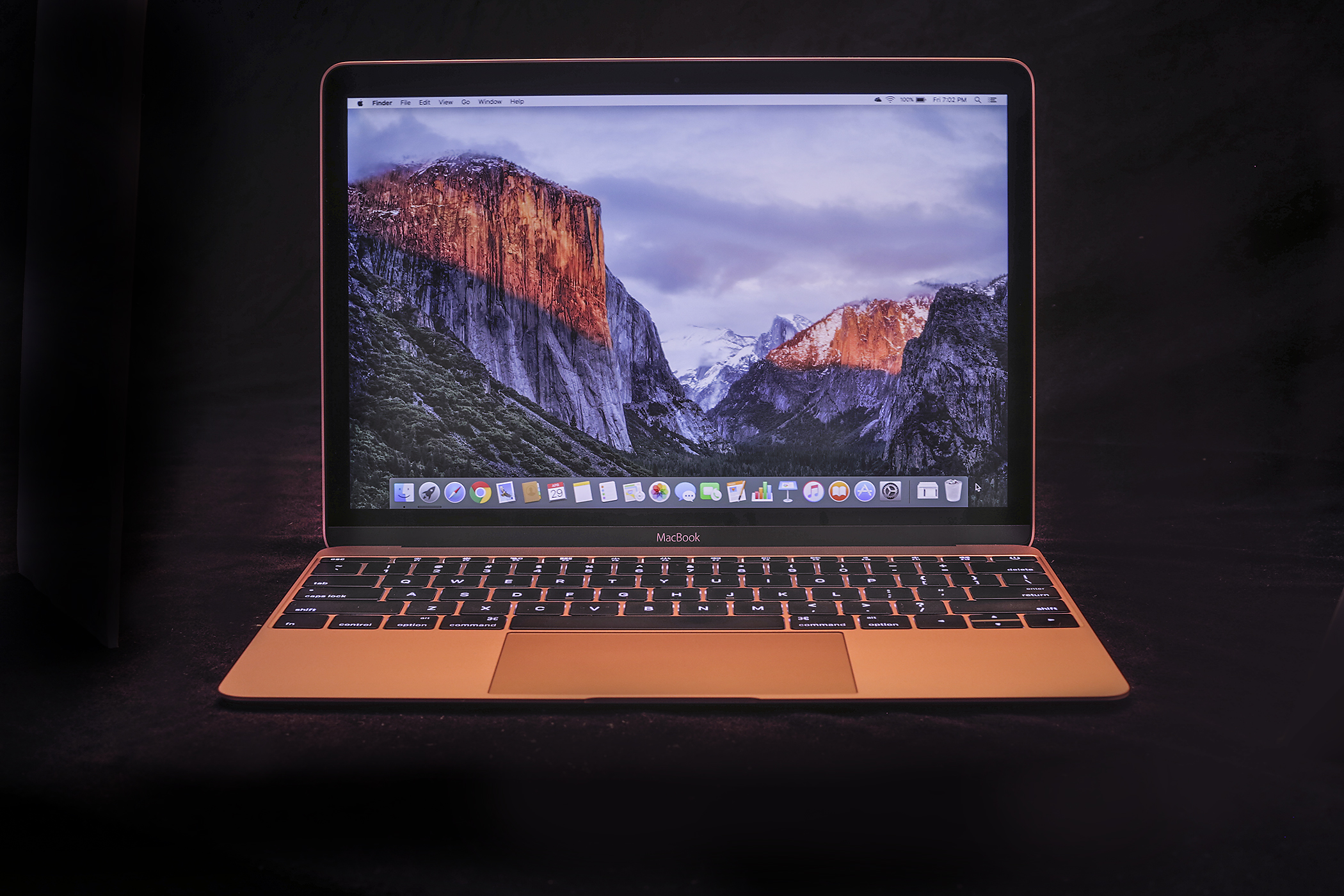 Unlike, say, the Surface Pro 4, the MacBook is easy to type on when it’s in your lap, just like my old 12-inch iBook from the early 2000s. It’s lighter and thinner, of course, but just as sturdy. How light? I can barely tell when it’s in my backpack — and I can’t say that about the MacBook Air. How thin? There’s just enough room in the base for the headphone jack on the right side and the USB-C port on the left side.

Like the keyboard, the trackpad is shallow; it doesn’t go down much when you click. Instead, you hear a subtle tapping sound. If you push down harder, you’ll hear a louder, decidedly more deliberate sound — that’s Force Click — even though the trackpad doesn’t actually click, in the conventional sense. Force Click still doesn’t let you do a whole lot, but it’s nice to have for things like previewing files in the Finder and getting definitions of words in the browser.

Still, the trackpad is very sensitive and precise, unlike pretty much any Windows laptop.

Then again, as is the case with any MacBook, you can’t bend the display back beyond a certain angle, and you can’t pop it off and use it as a tablet, either. Meh.

Altogether, though, this machine feels luxurious. The border between the keyboard and the trackpad is so narrow. The keys run from edge to edge. You can barely feel the seam between the bottom piece of aluminum and the body surrounding the keyboard. I can’t imagine what would happen if it were to fall to the ground.

Even though this MacBook style has been out in the world for more than a year, plenty of people still haven’t seen one in person before. And when they do, they’re usually amazed by the look and feel. You can’t say that about the new iPhone SE.

When I turned on the computer for the first time, the keyboard backlight was on, and it was nice and bright. I smiled — it was a pleasant surprise from the very beginning. And maybe that’s why I was really prepared to give this keyboard a chance. Initially, I was typing slower than usual on it, but my fingers have gotten better at the quick-pulse typing that this keyboard requires. You push a key down hard but only a little bit, and then you let go. 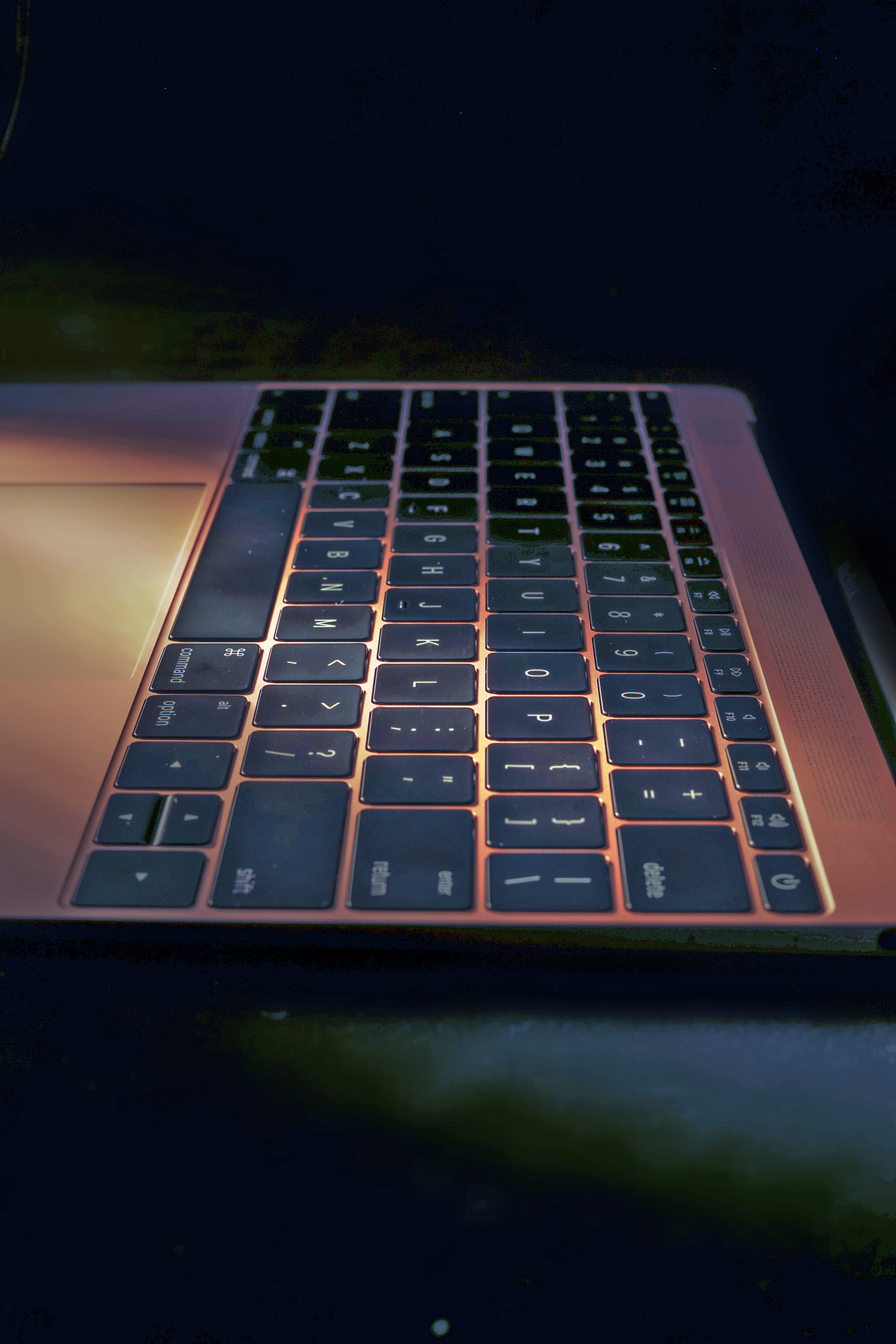 Above: The MacBook’s keyboard.

Now, I actually like how the keys only go down half a millimeter. When I type on other keyboards, I notice how cushy the keys are by comparison.

The arrangement of the keys is also different from the MacBook Air and the MacBook Pro. The escape key is extra long, which I like. But the arrow keys are all the same height as the shift key above them and the option key to their left, which I don’t like.

As you would expect with an Apple device, the 2304-by-1440 Retina display is excellent. It’s brighter and clearer than on my 13″ MacBook Air from 2014. Compared with many other modern laptops, including the Dell XPS 13 and the recently released HP EliteBook Folio G1, this display is delightful to look at. But colors don’t jump out quite as much as they do on the Surface Pro 4. The black bezel is nice and narrow, however.

The speaker, located just above the keyboard, is plenty loud and clear. It sounds a tad bit tinny, and it’s lacking in heavy bass, but it beats the speakers on the Windows machines I’ve tested recently.

I’ve been using the 1.1 GHz Core m3 model (Core m5 and m7 editions are also available) with 8GB of RAM for the past month, and performance rarely disappoints. Things do slow down when battery life dips below 10 percent and anytime there are more than 20 browser tabs open. And the bottom of the laptop does warm up after a few hours of browsing. But there’s never any fan noise, because there is no fan.

The move to sixth-gen Intel Core M processors has given the new MacBook better battery life. But there’s only so much that you can pack into a device this small. I generally got six to eight hours on one charge, although Apple claims it will last up to 10 hours. It would be nice if the battery lasted longer. At least it charges up quickly — it returns to 100 percent within two and a half hours.

On the other hand, this being an Apple device, you would expect it to have a fine camera, but that’s not the case. Just like with last year’s MacBook, the 480p FaceTime camera on this year’s version is remarkably low-quality. I routinely apologize at the beginning of video calls, and I refrain from sharing any selfies I take with the included Photo Booth app.

In refreshing this MacBook, Apple did not elect to add ports to the original, and that’s frustrating. Having a single port means relying on adapters to use many peripherals.

But the move to USB-C is not all bad. 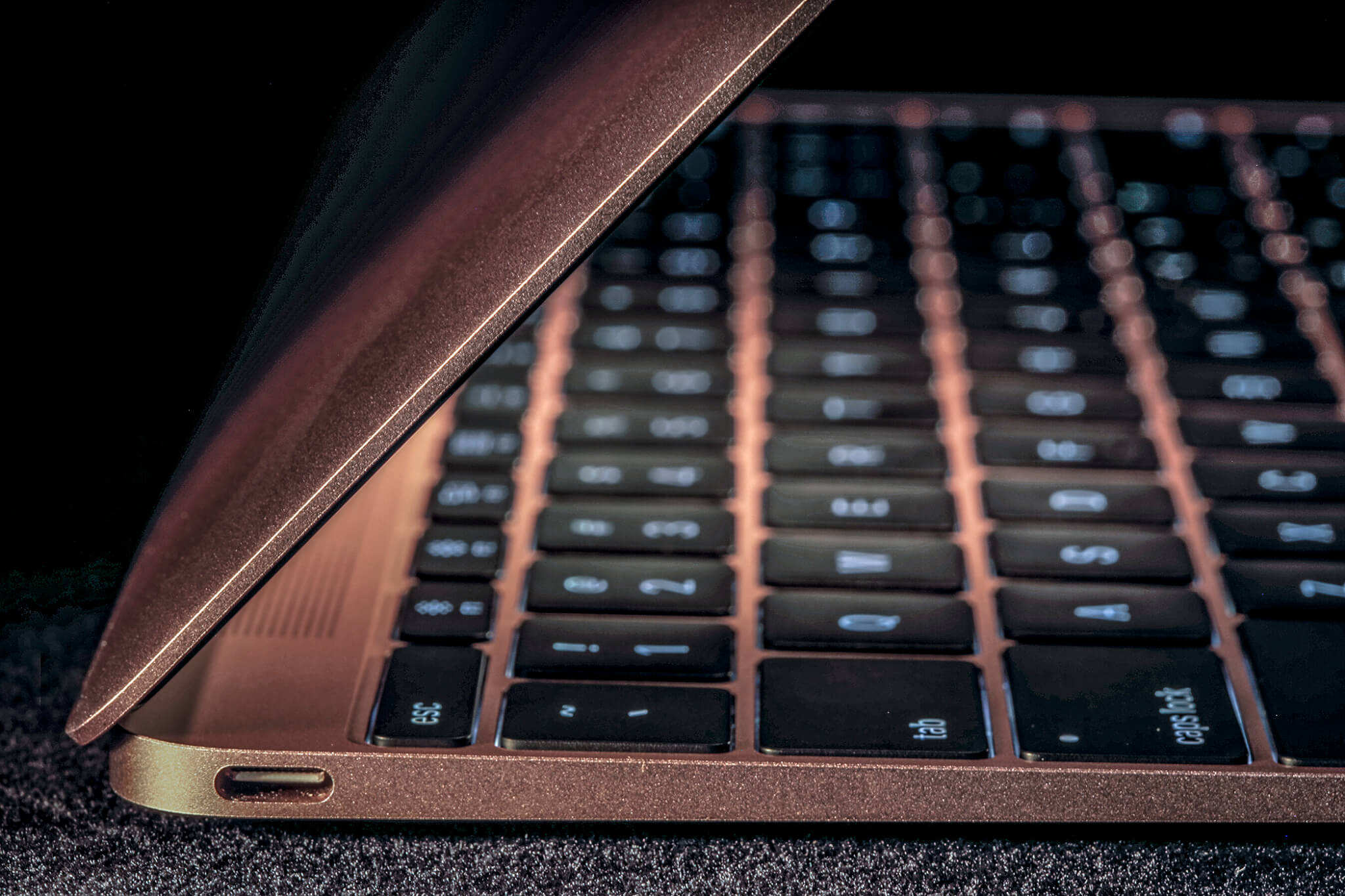 Above: The MacBook’s lone USB-C port.

One night, after working at home for a few hours, I went to my bag to grab the MacBook charger, but I didn’t find it. I realized I’d left it at the office, and I panicked. But then I remembered — unlike any Mac laptop I’d owned before, this one uses a standard that goes beyond Apple. I fumbled around some more in my bag and pulled out the charger for my Nexus 5X. It worked, and I was relieved. This is a turning point for Apple, and it benefits customers.

I miss the MagSafe AC adapter jack on older MacBooks. Having no light and no magnetism on the charger makes it hard to plug it in in the dark. Now, if only Apple could develop a MagSafe implementation of USB-C…

But the design is not nearly as striking, nor is the device as portable. Which is why the new MacBook is worth a look if cost isn’t a huge factor. Battery life and computing power are both improved, and the rose gold is damn eye-catching.