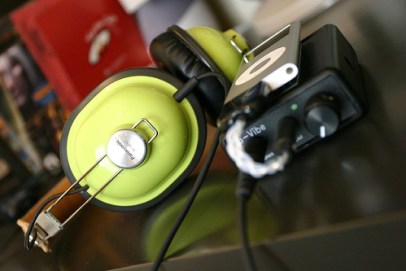 Apple, the company responsible for the widespread popularity of heavily compressed music, is looking into offering high-fidelity music files that will surpass the quality of CDs.

This is good news for audiophiles, who have long bemoaned the popularity of heavily compressed music files. It’s also a sign that Apple, and other music retailers, are finally ready to leap beyond CDs and offer consumers something akin to “high definition” music. Standard audio CDs are encoded at a 16-bit resolution, so offering 24-bit files — the resolution most music producers capture in studio recordings — would be a major fidelity leap.

Music quality has taken a step back from CDs with the rise of the MP3 and the advent of digital music downloads. While CDs offered music that was technically much higher quality than the cassette tapes that preceded them, MP3 files exchanged fidelity for small file sizes, which made them better suited for storing on computer hard drives and portable music players.

File sharing sites like Napster, Kazaa, and Audiogalaxy helped promote the popularity of MP3 files, but it was Apple’s iTunes Store that proved digital music could take on CDs when it came to legitimate sales. Unfortunately for music fans, iTunes files were initially a low-quality 128 kilobits per second (kbps) format, and it took years for Apple to offer a higher quality “iTunes Plus” format.

And while digital music files thrived, next-generation disc formats like DVD Audio and Sony’s Super Audio CD failed to catch on with mainstream consumers. Both of those formats offered surround sound 24-bit audio, which sounded light-years beyond CDs and were an even bigger leap beyond compressed audio files.

We’ll likely see new music formats supported by Apple and other digital music retailers that would allow for multichannel audio and 24-bit support. As CNN points out, some modern Macs can support 24-bit audio files, but many other computers and portable audio players won’t be able to play them. It will be years before most consumers can take advantage of the higher quality music files, but for those lucky few who can, it will be the first step towards the next generation of digital music quality.