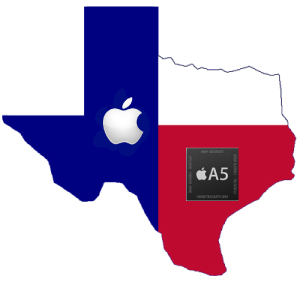 While most components for Apple devices are made overseas, its A5 processor, which power the iPhone 4S and iPad 2,  is produced in the far away land of… Texas.

The A5 processors are manufactured in a factory in Austin, Tex., according to a Reuters report that cites sources familiar with the matter. It’s a big surprise since Apple usually gets its components through Asian manufacturing companies that can keep their labor costs down, which in turn, brings costs down for Apple.

The $3.6 billion factory, which belongs to Korean electronics company Samsung, is a 1.6 million square foot facility (about the size of 9 football fields). It employs about 3,500 people and is the second non-memory chip production facility owned by Samsung. According to the Reuters report, the facility was expanded to include a production line for such chips when Samsung signed a contract with Apple earlier this year.

Although the information isn’t confirmed, it would make sense for Samsung to produce the crucial Apple A5 chip in Austin. The city has plenty of potential talent that comes from the University of Texas’ engineering schools. Austin is also home to a very large Apple customer call center, which employs thousands of people.