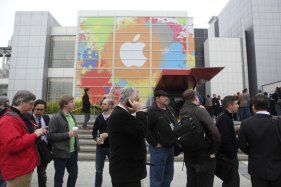 The waiting is the hardest part: iPhone and iPad app developers are still trying to find out exactly what Apple means by changes to the wording of its developer contract that appear to ban important software functions widely used by app developers.

The most important two are third-party ad targeting, and the collection of app usage data for analysis by the developer.

A developer who has been in touch with Apple told VentureBeat that, surprisingly, Apple’s developer support representatives don’t yet know exactly what will and won’t be banned from future apps:

“They basically said the new clauses are for 4.0 (not accepting 4.0 apps yet) and they haven’t decided what will be allowed and what won’t be allowed. They said they will discuss with guys like [mobile analytics vendor] Flurry, etc.

On the other hand, it’s become widely accepted as fact that going forward, Apple won’t allow Flash apps to be converted to iPhone / iPad apps — no way, no-how, no excuses. Developers will need to build their apps specifically for Apple’s platform, using Apple’s specified software languages and toolkits. What they still don’t know is if they’ll need to abandon targeted-ad networks like AdMob in favor of Apple’s new iAd system, and if they’ll need to remove third-party analysis tools like Flurry from their apps.