Apple CEO Tim Cook is answering some tough questions on Capitol Hill today, responding to questions from the U.S. Senate Permanent Subcommittee on Investigations on Apple’s untaxed billions of dollars in overseas income.

But not from Sen. Rob Portman (R-Ohio), who used most of his question time to chat about his own tax code reform initiatives.

Portman, who has has some presidential aspirations in the past and clearly wants to massively rewrite the tax code to make it easier to “repatriate” overseas income, also tossed a few softballs towards to Cook and his subordinates. And he illuminated an interesting correlation between Apple and Samsung.

“Apple and Samsung pay about the same global tax rates, correct?” Portman asked. “But your investment options are a lot more limited.” 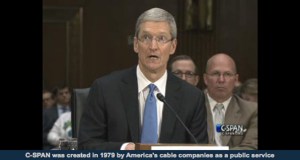 Portmans’ point, which Cook and Apple CFO Peter Oppenheimer agreed to, is that Samsung paid about $4 billion in corporate taxes on about $28 billion in global earnings — roughly equivalent to Apple’s global effective tax rate of about 7 percent. And, that Samsung can bring home foreign income without being taxed.

“Our international tax code puts our workers at a disadvantage,” Portman continued. “No other country in the world has such high barriers to bringing international income home … and Canada just lowered to its rate to 15 percent.”

That 15 percent, of course, is much lower than the U.S. rate of 35 percent, which has caused Apple to refrain from bringing about $100 billion in overseas income home to the the U.S.

Portman asked Cook if Samsung was Apple’s biggest competitor, which Cook was careful to deflect into “it’s one of them,” and highlighted the fact that Apple is an American success story. Cook answered that Apple’s overseas income has powered Apple’s growth and that Apple has created or supported 600,000 U.S. jobs.

“80 percent of the world’s purchasing power lies beyond our borders,” Portman said. “But we’re living with an international tax code that’s a relic of the 1960s.”

Almost all of the OECD countries, Portman added, have moved to a territorial tax system in which earnings are taxed in the countries in which they are realized — i.e., where sales are made. And they do not tax foreign income.