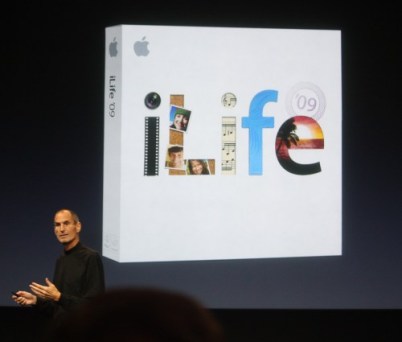 Apple today announced the latest version of its flagship software suite, iLife ’11, at its “Back to the Mac” event. The suite includes 2011 versions of iPhoto, iMovie, Garageband, and more.

Apple senior vice president Phil Schiller demonstrated the new features in iPhoto ’11, which seems to be taking some cues from iPad applications with its new fullscreen mode. He showed off the new places view, which plots your photos on a world map using GPS information. iPhoto ’11 also includes some new slideshow views, one of which looks like a 3D tour through a map featuring your photos.

Schiller admitted that the new iPhoto album view looks like the photo albums seen on the iPad. You’ll now be able to pull in photos from Flickr. Emailing photos has also gotten easier, as you’ll now be able to send photos directly from within the application. iPhoto ’11 also features increased sharing options, including the ability to post photos on Facebook and see comments from within the app.

Schiller also demonstrated the new project view in iPhoto, which looks a lot like iBooks with its wooden bookshelf. He showed off how you can easily create professional-looking photo books and have them shipped off to friends from the app. You’ll also be able to order cards using your photos with actual letterpressing, for an extra elegant touch.

Apple CEO Steve Jobs introduced Randy Ubillios, who serves as the company’s chief architect for video applications, to demonstrate iMovie ’11. He said that the number one request from users was better audio editing, so that’s what Apple focused on in the new version. You’ll be able to select specific audio segments and adjust the levels for those individually, add audio effects with realtime previews, and perform “one step effects” — which look like a collection of effects that can get applied to videos simultaneously.

You’ll also be able to adjust the FPS (frames per second) of your video, which is a pretty advanced feature for entry-level software. Apple also integrated iPhoto’s face detection technology into iMovie, and the software will also be able to tell what sort of shot — for example, close up or wide — is being used in the video.

One cool new addition is the ability to create your own movie trailers, something I’m sure many budding cinephiles will enjoy playing with. Apple put together some epic trailer music samples, which apparently were recorded by a full symphony. Expect to see tons of annoying homemade trailers in the future.

Apple’s Xander Soren, who works in product marketing, demonstrated GarageBand ’11, which includes a bunch of new features to make your homemade music sound better. It can now perform “Groove Matching”, which sounds a lot like AutoTune for musical  timing. A new feature called Flextime will let users change the lengths of wave forms, which can make notes shorter or longer instantly.

GarageBand ’11 also includes new musical lessons, which rely on a fullscreen view. Soren showed off some piano lessons from the application, which could certainly be useful to some budding musicians. A new “how did I play” feature lets you follow along with a music lesson similar to playing Guitar Hero or Rock Band.

iLife ’11 is available today as a $49 upgrade for existing Mac users, and will be included free with new Macs. The video below is a demo of the new GarageBand.