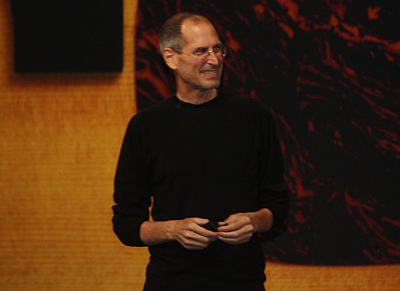 The new OS will include bug fixes for many iOS 4 issues, as well as some new features including high-dynamic range (HDR) photos, Game Center, high-definition video uploads over Wi-Fi, and TV-show rentals.

The addition of HDR photo capabilities was certainly unexpected. Jobs approached it as a way to help show more details in photos that were either blown out and too bright, or too dark. The HDR process involves taking three separate photos — with highlights, shadows, and midranges — that are combined to bring out details that are normally lost.

Game Center offers a set of APIs that allow developers to build multiplayer support into their iOS games, and is an app as well. Representatives from Epic Games hit the stage to show off their first iOS game — a sword and sorcery RPG that’s going by the name of Project Sword. The showed off how you can invite a friend through Game Center to play a multiplayer much, similar to how Microsoft’s Xbox Live works.

Jobs said that iOS 4.1 would be available for the iPhone and iPod Touch starting next week. He also briefly touched on iOS 4.2, which will be released in November, and will also include iPad support. iOS 4.2 adds support for wireless printing, and Airplay — a revamped version of Airtunes that allows users to stream photos and video between Apple devices, in addition to music.