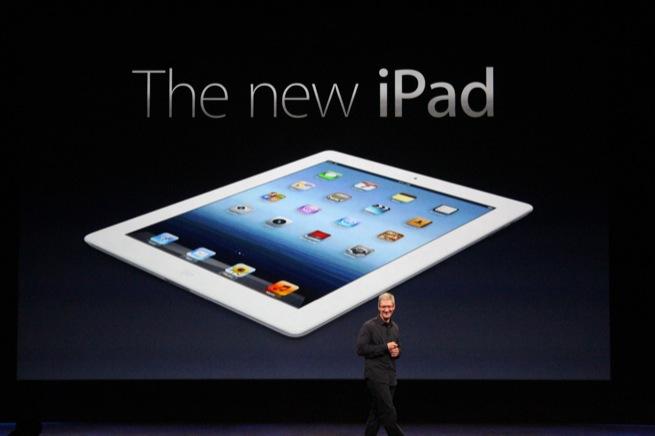 Apple’s iPad has been a transformative tablet device, but it was cursed from the beginning with a low-resolution display. That changed today with the launch of the new iPad, Apple’s third-generation tablet, which adds an ultra-high resolution Retina Display and LTE 4G connectivity.

Apple CEO Tim Cook unveiled the new iPad at a media event in San Francisco today, where he also announced an updated Apple TV set-top box. “We think the iPad is the poster-child of the post-PC world,” Cook said.

Almost boasting, he reminded the audience that Apple sold 15.5 million iPads last quarter, more than any PC manufacturer sold in their computer lines.

The new iPad (not called the iPad HD or the iPad 3, as we had suspected) features a new screen with a resolution of 2,048 by 1,536 pixels, a huge bump over the previous iPad’s 1,024 by 768 screen. Apple says it features 264 pixels per inch, which is smaller than the human retina can discern at a normal viewing distance, and which will make text look sharper than a newspaper. By comparison, magazines are usually printed at 300 dpi, only slightly higher resolution that the new iPad’s display. The iPhone 4’s Retina Display is denser still, at 324 pixels per inch. Since you’ll be holding the iPad farther away from you than an iPhone, Apple says the Retina Display name is still justified.

As expected, Apple updated the iPad’s camera capabilities: It can now shoot 5 megapixel photos from a rear camera as well as 1080p video. The rear camera sports backside illumination (for better low-light performance), a 5-element lens, and a hybrid IR filter.

Apple also added LTE 4G capabilities, with a maximum theoretic speed of 72 megabits per second. The iPad HD will also support HSPA+ speeds up to 21Mbps and dual-carrier HSDPA for up to 42Mbps. Basically, it’ll be very fast on many mobile networks.

Apple showed off an updated version of iWork as well. You’ll be able to edit 1080p movies within iMovie now, and Apple is finally bringing iPhoto to the iPad as well, with a slew of editing features.

Despite all of the powerful new hardware, the new iPad still features a 10-hour battery life and thin 9.4 millimeter profile (slighly thicker than the 8.8mm iPad 2).