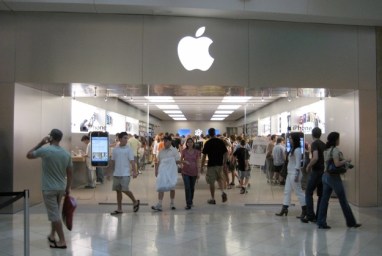 Apple was named the most valuable brand in the world today, overtaking four-time brand leader Google, according to Millward Brown’s Brandz 2011 report.

Apple’s brand value jumped 84 percent to $153.3 billion in the past year, mostly due to the iPad’s wild popularity and the iPhone’s continued growth. Google’s brand, meanwhile, fell 2 percent to $111.5 billion.

Given that Apple basically carved out an entirely new computing category with the iPad (or, at the very least, made the long-held fantasy of tablets a reality), it makes sense that the company’s brand would skyrocket. What is surprising is just how far beyond other big brands it is — Apple’s brand value is about $42 billion ahead of Google’s, and even further ahead of third-place brand IBM ($100.8 billion) and fourth place McDonald’s ($81 billion).

Other brands saw massive improvement in the past year as well. Facebook was named the top rising brand, growing 246 percent from last year to $19.1 billion. Chinese search giant (and Google competitor) Baidu was the second top riser, with a 141 percent improvement that led to a $22.5 billion brand value. Amazon overtook Wal-Mart to become the world’s top retail brand.

Technology brand value losers for the year included Nintendo, which fell 37 percent (likely due to slowing Wii sales), and Nokia, which fell 28 percent.