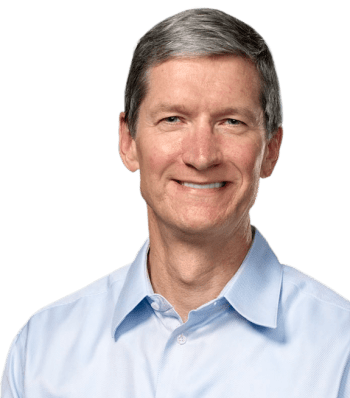 Tim Cook, Apple’s new chief executive officer, gave a small “State of the Apple” address today, touching on the recent accusations of poor working conditions in the factories that make Apple products. He also laid out what the iPhone has done for Apple and why cheap tablets just aren’t worth it.

When is Apple not in the news, on people’s tongues, and below their fingers? The chief executive, who recently announced a net profit of $13.06 billion for the fourth quarter of 2011, chatted about the company’s growth at the Goldman Sachs Technology and Internet Conference today.

The conversation started with the accusations that Apple has kept poor working conditions for its assembly line workers.

“No one in our industry is doing more to improve working conditions than Apple,” said Cook at the conference, repeating a claim he’s made several times recently.

Recently, dozens of workers at manufacturing company Foxconn threatened a mass suicide based on payments they believed they were owed. Although the workers were building Xbox 360s, Foxconn also builds many Apple products, and the threats prompted a renewed look into factory working conditions, including hours worked, and payments received. In reaction, Apple announced Monday that it would look further into Foxconn’s operations and had partnered with the Fair Labor Assocation to audit conditions at the factories.

Cook explained that transparency is becoming a huge issue for Apple, which is now reporting monthly audits of its manufacturing teams to its website for public viewing. These audits will ensure that child labor is not present in Apple’s supply chain, which Cook says is “abhorrent,” and “extremely rare in our supply chain.”

“If we find a supplier that intentionally hires under-aged labor, it’s a firing offense,” he said. “We don’t let anyone cut corners on safety.”

Conditions aren’t 100 percent perfect for Apple, though its goal is to get there. The company has capped its employees’ work weeks at 60 hours, In a recent survey of its 60,000 employees, it found only 84 percent complied with that limit. In other words, 16 percent of its employees are still being overworked. But Cook assured that he and his team are working to get all employees down to that 60-hour mark.

The monthly reports will help keep Apple honest, but these labor issues have been going on for over four years, according to an anonymous source of the New York Times’.

China, where many of Apple’s iPhone and other manufacturing operations take place, is actually driving much of worldwide smartphone sales. According to Cook, 25 percent of the expected $2 billion smartphone market comes directly form China and Brazil. Apple says it is focused on selling its products into the Chinese market and has had particular success there for its iPhone. In previous years, the company took in a few hundred million dollars from iPhone revenue in China, but increased that to $13 billion last year.

But in order to reach more people, you have to make the iPhone more affordable for everyone, right? Cook doesn’t believe so. Much like his predecessor, the late Apple founder Steve Jobs, Cook believes the product is worth the price and people will be unhappy with a device that has been pared down to fit into an economic mold, including going to a budget prepaid approach.

With the iPhone, Cook explained, China found postpaid plans to be “amazing” and were happy to switch carriers to get the product.

Mac sales in China have risen 100 percent year over year since the iPhone was introduced to the market and it continues to take Apple to other parts of the world. Indeed, Cook believes it has introduced the company’s name to people who had never heard of it before. And the iPad is doing the same.

When the iPod originally came out, it brought the music store to the Mac, and soon after to the Windows PC. After its introduction to the U.S. market, suddenly people started recognizing the Mac more. It created a “halo” around the computer, and helped push its name out to the masses because of the association with this cool, new MP3 player that everyone wanted. Now, Cook says, the same thing is happening with the iPhone and iPad.

“The iPhone is [now] creating a halo for the Mac,” said Cook. The iPhone has done the same for iPad.”

The company has thus far sold 55 million iPads, a milestone that took Apple 22 years to reach with its Mac line. There are over 170,000 apps optimized specifically for the iPad today, which Cook believes is the mark of a good product. He challenged the room to invite the best PC developers to a conference and see how many turned up. He suggested that you might have an empty room, but ask to bring the best iOS developers to a conference, and you might not have enough room in the hotel to hold them all.

“Many of us thought at Apple [when the iPad was being introduced], that the tablet market would become larger than the PC market,” Cook said. “I feel that stronger today than I did then because I look out and see all these incredible uses for it.”

And Apple isn’t going to budge on its tablet pricing either. After being asked about Amazon in particular, Cook explained:

Price is rarely the most important thing. A cheap product may sell some units…[customers] feel great when they pay from their wallets and then they get home and use it and then the joy is gone. And the joy is gone every day they use it. You don’t keep remembering, ‘Oh, I got a good deal!’ Because you hate it!

A common concern among technology investors is tablet sales taking away from PC sales. While the booming tablet market is indeed cutting into Mac sales, Cook isn’t concerned since Apple is profiting either way.

“I think the iPad has cannibalized some Mac sales … but we’d prefer to do it than have somebody else do it,” said Cook.

Even though PC sales will be hurt, Cook doesn’t think it’s necessarily a bad thing for PC companies.

“I don’t predict the demise of the PC industry,” said Cook. “But when you’re competition with someone, it forces you to sharpen you message and tell who you are. I think it will be good for the PC industry, they’ll innovate.”

Cook restated the usual reasons the iPad is such a hit, including its intuitive interface  — even his own mother can use one!

Apple TV: The little hobby that could

Tim Cook really wants you to buy an Apple TV. He made a sales pitch for the Apple product that the company has labeled a “hobby” in the past. There have been rumblings of an “iTV” product in the pipeline. Cook didn’t address the rumors directly, but he did say he was enthusiastic about the general category.

“For those of us that use it, we’ve always thought there was something there,” said Cook. “And that if we kept following our intuition and following that string, we thought we would find something larger.”

“We need something that could go more main market for it to be a serious category.”

Mostly Cook steered away from hinting and instead explained why the company had downplayed its current television offering.

“The reason we call it a hobby is we don’t want to send a message to you or shareholders that the market for it is the size of our other businesses,” said Cook. “Apple doesn’t do hobbies as a general rule. We believe in focus and only working on a few things.”

The Siri and iCloud innovations

Apple’s two most recent new technologies are iPhone-assistant Siri, and cloud-storage product iCloud, both of which Cook repeatedly called “profound.”

Cook said that iCloud, which has 100 million users, represents a fundamental shift in how the company thinks about computing.  A decade ago, Apple viewed the PC as the central hub of consumers’ digital lives. The Mac was the “repository” for all your files, music, movies, contacts, and other data.

“iCloud turns that on its head,” said Cook. The company recognized that people live off of multiple devices and syncing was getting in the way of a good customer experience, and it moved the hub to the cloud. The product only launched in October and is still in its infancy.

“There’s obviously more we can do with it,” said Cook. “It’s a strategy for the next decade or more.”

Cook went on to praise Siri for being the first major new tool in a long time for imputing data into a device — except for Apple’s own gestures of course.

“For years if you were a PC or mac user you used a keyboard and mouse for input, and there was evolution in that space but not a lot of revolution.”

Cook said Apple doesn’t do separate product and loss (P&L) reports on the two technologies: “We want to have a great customer experience and we think measuring all [Siri and iCloud] at that level would never achieve these things.”

How Tim Cook’s Apple will be different

“Steve drilled in all of us over many years that the company should revolve around great products, and that we should stay extremely focused on a few things rather than do so many things that we don’t do any well,” Cook said.

However, the real answer may be Cook’s presence itself. Throughout the Q&A, Cook was affable, funny, and talkative — a departure from Steve Jobs’ sometimes prickly style.