Today Apple introduced a technology called iMessage Apps. It’s a way for developers to build third-party experiences that go inside the widely used Messages app, which works on iOS, macOS, and the Apple Watch.

This is Apple’s way of letting outside developers add their own content and experiences into a widely used messaging app, and it makes very reasonable sense given how Microsoft has been letting developers build integrations into Skype, and Facebook has been doing the same with Messenger. Google has revealed related plans for its forthcoming Allo app. Kik, Line, and Telegram have begun accepting outside integrations, as well. This trend is even playing out in the parallel universe of enterprise software — Slack is the greatest example there.

But all of these companies have chosen a text-messaging interface through which people will talk to other services — namely chatbots. Apple, in its infinite Apple-ness, is circumventing the hype around bots and will be simply letting developers build app extensions that live inside of a new “app drawer,” which users will open in Messages on iOS 10 by tapping the little blue A button that historically stands for App Store.

Developers can build these iMessage Apps using the iOS software development kit (SDK), which became available today in the beta release of Xcode 8. It’s possible to fine-tune the look and functionality of these mini apps so that they don’t just look like the rest of Messages. (Documentation is already available.)

Onstage today, Apple’s Craig Federighi talked about a Square Cash iMessage app. It’s a bright green widget that pops up in place of the keyboard. A user selected $200 as the amount on a scrollable dial and then hit the pay button to pay that amount to the message recipient. The result was a box right underneath an earlier text message with a big $200 bill and a link to “tap here to deposit this cash.” 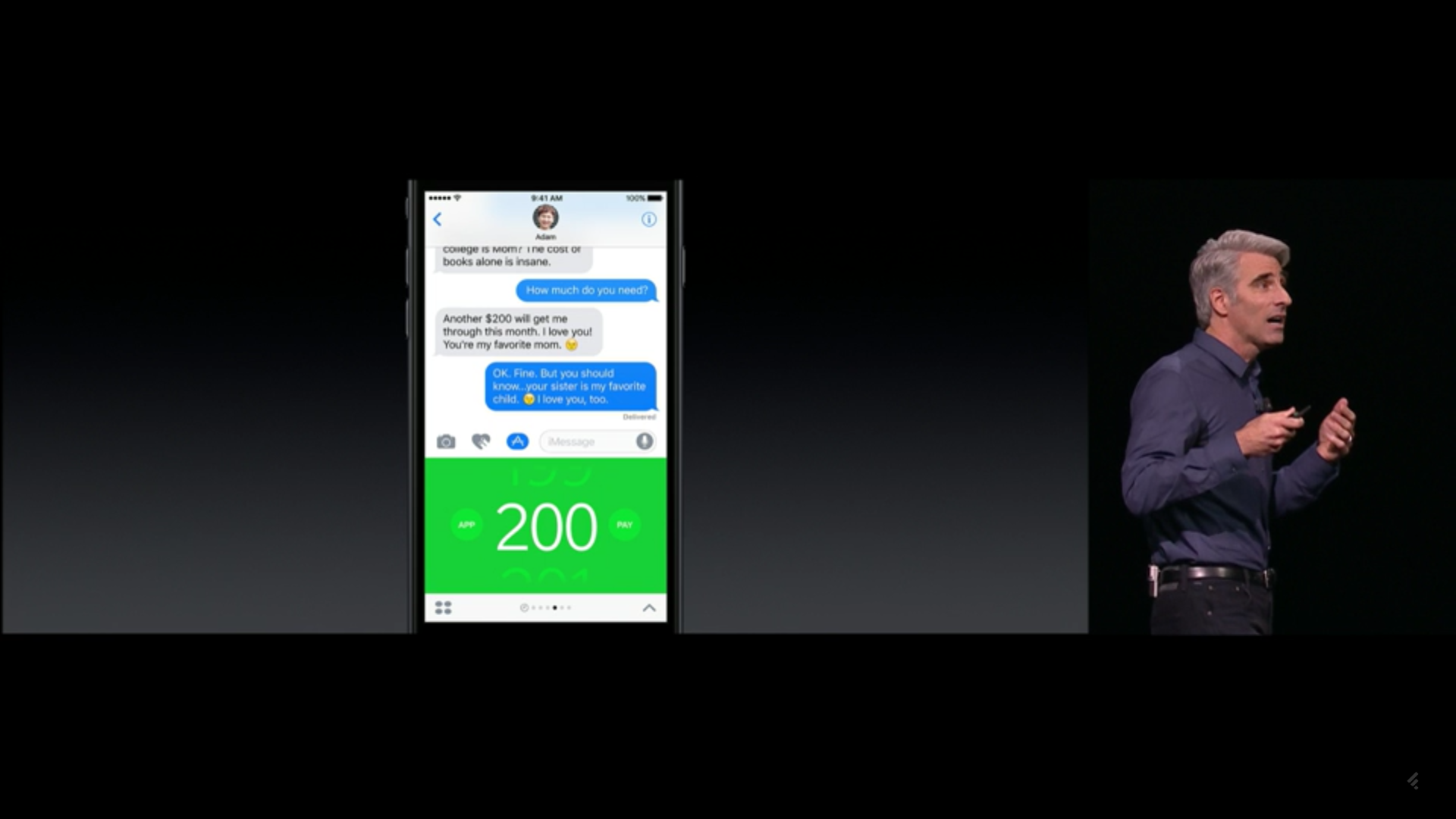 Above: The Square Cash iMessage App for Messages in iOS 10.

Federighi also demonstrated a DoorDash iMessage App through which multiple people could collaborate on one food delivery order. In a message bubble, this iMessage App displayed a dish from San Francisco restaurant and food truck operator Curry Up Now, with a little red DoorDash logo in the top left. Underneath that, there was some text: “3 people,” “Brian Croll added 2 items,” and a grand total in the amount of $48.68. “So I could just tap in and see what’s going on,” Federighi said. After tapping on the widget, he was confronted with a full screen showing more detail, courtesy of DoorDash — a menu, prices, estimated delivery time, and a “view group cart” button. From there, Federighi checked out the cart and then added to it. When he was done, the DoorDash widget that had originally appeared in his Messages group chat was updated to reflect the changes to the order. 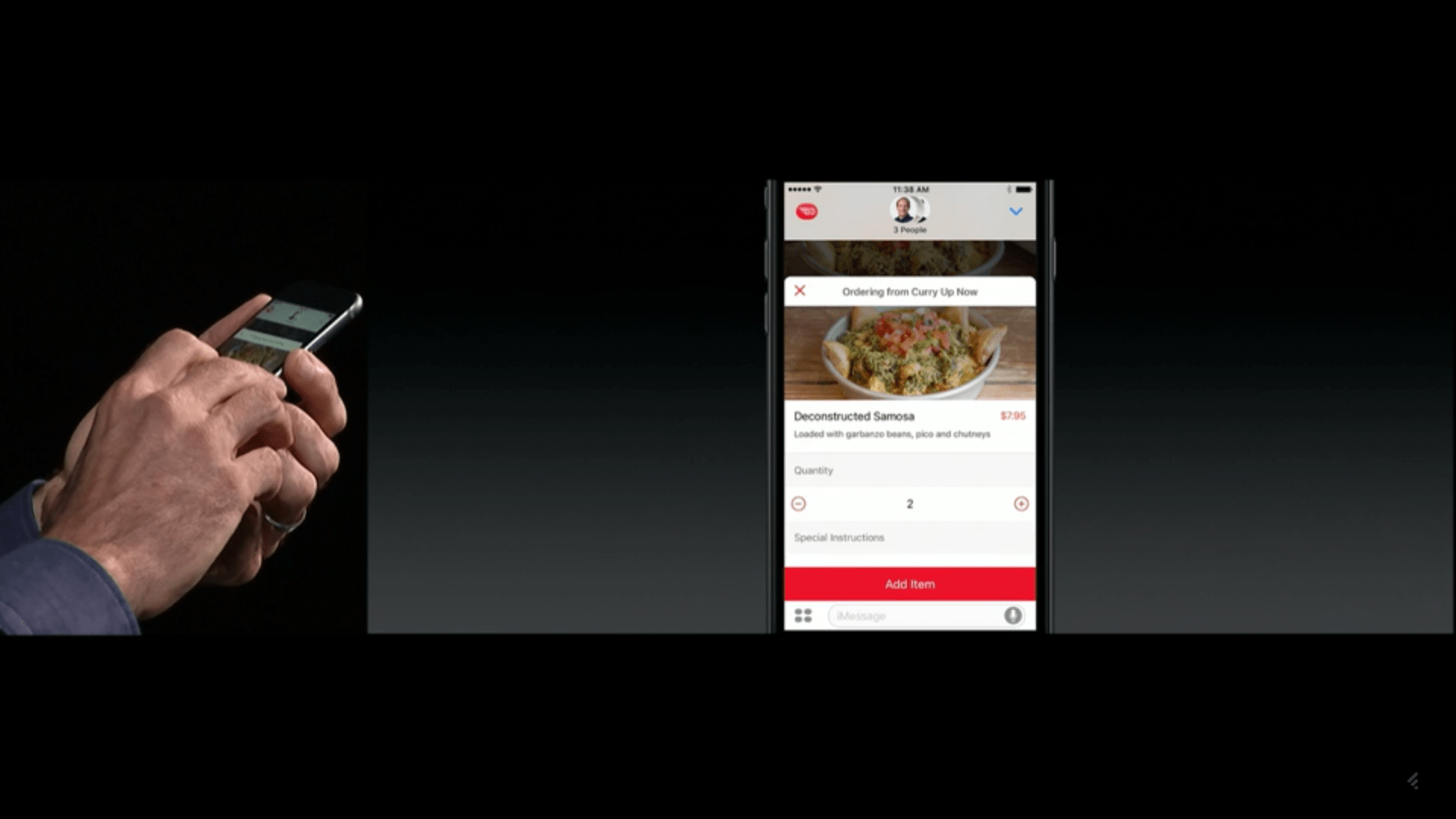 Above: The DoorDash iMessage App, as demonstrated by Apple’s Craig Federighi.

With the JibJab iMessage App that took up just the keyboard space, Federighi chose one of a few faces of people he knew — that of fellow Apple executive Eddy Cue — and applied it to a series of animated GIFs with headless dancing figures. The result was a mini Eddy Cue doing the jig that popped up in a chat bubble in Messages.

Other iMessage Apps that appeared in today’s keynote but were not demonstrated: Fandango, Flightradar24, Spring (one of the first Facebook Messenger bots, interestingly), OpenTable, and Paperless Post. There will be an App Store for these iMessage Apps, although Federighi did not spend longer than a moment to show it. It’s unclear if there will be search ads, which are coming to the App Store for iOS. 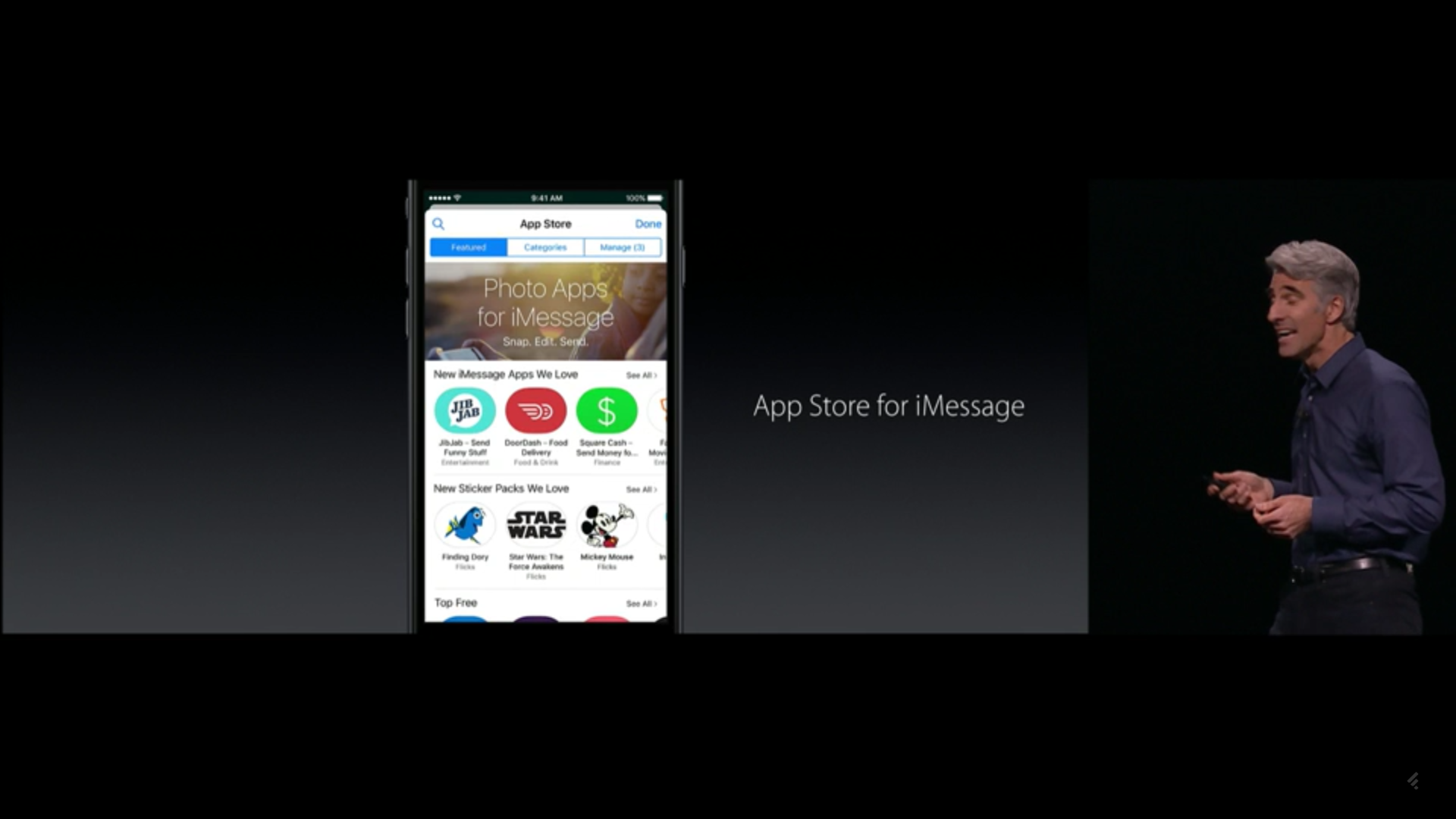 Above: The App Store for iMessage Apps for Messages in iOS 10.

A question worth pondering is why Apple is not following along with the chatbot madness of the past few months. Some app developers have come to believe that chatbots are a viable way to grow usage or are at least an important technology to try out. Now developers will have a different model to figure out. (Actually, if anything, these iMessage Apps are more like WeChat’s third-party apps.) Then again, some developers will inevitably be lured by the user base and prominence of Messages, so maybe this point doesn’t matter much.

Even if we don’t know the reason that Apple didn’t push the bot button, we do know one thing — Apple felt that it must enhance its default messaging app with tools from outsiders, as alternatives like WhatsApp, Messenger, and Snapchat just keep on growing.