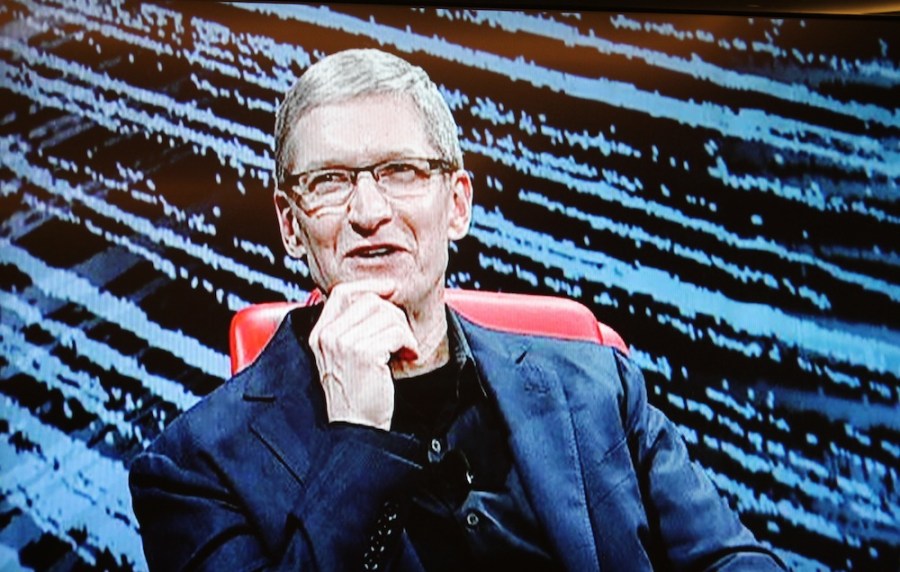 The chief executive of the world’s largest company took the stage today at the tenth annual All Things Digital conference, also known as D10, in Rancho Palos Verdes, California.

“The juices are flowing, and we have some incredible things coming out,” he added.

It was not Cook’s first interview since taking the helm of Apple last year after the passing of the company’s co-founder and late chief executive Steve Jobs, but it promised to be one of the most in-depth. With an hour scheduled for the talk, it was clear that D10’s co-chairmen, Walt Mossberg and Kara Swisher, still have the ability to pull top-notch executives to the interview chair. (All Things D was one of the few public events Jobs ever consented to be interviewed at, in later years.)

Cook affirmed his confidence in the company’s core Mac business, which has grown faster than the overall PC market every quarter for the past six years, he said. But it was the iPhone and iPad he had the greatest enthusiasm for, particularly the iPad. He noted that 70 million people now own iPads, and that in many cases it’s doing what personal computers never could. However, he was skeptical about the competing approach, from Microsoft and Google, which attempts to fuse notebooks and PCs with common operatings systems.

Mossberg asked how the company is doing after the passing of Jobs.

“It was one of the saddest days of my life,” Cook said, “the day that he died. And as much as you could predict that, it really hit me.”

On what he learned from Jobs, Cook said, “I learned that focus is key. You can only do so many things well, and you should cast aside everything else.”

We’re going to double down on secrecy

“We’re going to double down on secrecy on products,” Cook said. However, he boasted that the company will be even more transparent than ever in other areas. When pressed for an explanation, he referred to “social responsibility” and the company’s supply chain, a reference to the issues that Apple has faced over labor abuses and poor working conditions at its chief manufacturing partner, Foxconn.

Cook expressed no intention to stop using Foxconn’s factories, or to build its own factories in China. But he did say that the company is working closely to limit excessive overtime at its partners’ facilities.

The company is measuring working hours for 700,000 people, he said, and is now seeing 95 percent compliance with working hour limits, and it’s publishing reports every month on what it finds.

“You used to have at least one factory in the U.S.,” Mossberg asked. “Do you ever see the possibility … will there be an Apple product ever made in the United States again?”

“I want there to be,” Cook answered. He pointed to the “engine” of the iPhone and iPad, which are made in Austin, and the Gorilla Glass on those products, which are made in a Corning factory in the U.S. Cook didn’t rule out the possibility of doing final assembly of an Apple product in America at some point, but he said one limiting factor is the absence of skilled tool and die makers in this country. By contrast, China has a huge number of talented people with this skill, which is essential to manufacturers like Apple

The patent problem: It’s a pain in the ass.

Cook pointed to the app economy as the bright spot for U.S.-based workers.

“In the U.S., there are hundreds of thousands of people developing apps. This whole segment of the economy didn’t exist just a few years ago.”

Asked about patent law, Cook admitted “It’s a pain in the ass.” However, he likened Apple’s attitude toward patents as being similar to an artist’s attitude toward her paintings: You don’t want someone “ripping them off” and taking credit for your work.

However, he said, for “standard, essential patents,” patent-holders need to license their work at reasonable terms.

“A patent carries with it a responsibility to license it in a fair and responsible way,” Cook said. For example, he said, a patent covering connecting to the 3G network is necessary for many parties to use, because you can’t build a cellphone without using it.

It’s a rather two-sided point of view, as Mossberg noted, as if Apple’s patents were defending its own “beautiful paintings,” while other companies’ patents were abuses of the system.

“Apple has not sued anyone over standards-essential patents that we own,” Cook said.

Cook looks forward to the date, three years from now, when one billion people worldwide have smartphones. And he likes Apple’s odds. “We have the best smartphone,” he said.

“We’re not fragmented,” Cook added. When the company releases a new OS, a vast number of people upgrade in a short period of time. The company offers a single phone, with a single screen size. It has just one authorized app store. By contrast, he said, Google’s Android is fragmented with a wide variety of OS versions, marketplaces, and device specifications.

Would the company offer a $99 iPhone? Cook wouldn’t be drawn out.

He insisted that the company’s approach to developing different types of iPods, for instance — the Nano, the Shuffle, the Classic — was not the result of carefully judging different price points. Instead, he said, the company’s goal was simply to create great products.

“Whenever we can create some fantastic products, and they yield different price points, we’re all in favor of that,” Cook said.

Apple TV: This is an area of intense interest for us

However, he said the company is sticking with its Apple TV set-top box, despite the fact that Jobs, at an earlier D conference, called the business a “hobby.”

“We’re not a hobby kind of company, as you know,” Cook said. “Our tendency is to put all of our wood behind a few arrows.”

“Apple TV, though, you can see what we’ve done, and we’ve stuck with this,” Cook said.

“It’s not a fifth leg of the stool. It’s not the same market size as the phone business, the Mac business, the music business, or the tablet business. But last year we sold 2.8 million Apple TVs. This year, just in the first six months of the year, we’ve sold 2.7M. … This is an area of intense interest for us.”

One of the reasons, Cook said, is that people who do have Apple TVs really love it.

“The customer satisfaction with that product is incredible. It’s off the charts. So we’re going to keep pulling this string and see where it takes us.”

Is that because Facebook is difficult to work with?

“They have their way of doing things,” is all Cook would say.

But he said there would be changes coming soon that would make iOS work better with Facebook.

“Facebook has hundreds of millions of users. Anyone who has an iPhone or an iPad, we want people to have the best experience with Facebook on those devices. So stay tuned.”

Cook also talked about Siri and said improvements were coming that might address some of the shortcomings the service currently has.

Attendees at the swanky resort included some of the cream of the digital and media industries. Fox chairman Rupert Murdoch, Washington Post chairman and Facebook board member Donald Graham, Spotify’s Daniel Ek, and a host of executives and venture capitalists munched on canapés and sipped Merlot while looking over the sweeping Pacific vistas offered by the Terranea Resort.