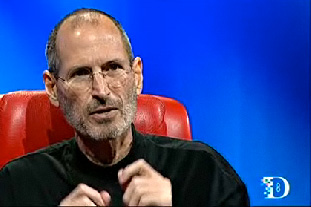 In April, Apple abruptly changed the rules in its written agreement to which iPhone app developers are required to conform if they want to be carried in Apple’s App Store. “The use of third party software in Your Application to collect and send Device Data to a third party for processing or analysis is expressly prohibited,” said the added text.

At the time, Apple wasn’t very communicative about the changes. But lately, Apple overlord Steve Jobs has become much more talkative in public. During an onstage interview at the D8 conference just outside Los Angeles yesterday, Jobs bluntly explained how app analytics firm Flurry provoked the ban on data collection by deducing and publishing the fact that they’d identified 50 gadgets in use on Apple’s campus that seemed likely to be the still-secret iPad.

In January, Flurry VP Peter Farago had cheerily published a report on the secret Apple tablets. Jobs explained yesterday how this infuriated him: “One day we read in the paper that a company called Flurry Analytics has detected that we have some new iPhone and other tablet devices that we’re using on our campus. We thought, what the hell?”

Flurry is known to most VentureBeat readers as a leading app analytics firm, and the author of a monthly report on the world of app development.  Farago texted me to say that he will email me a response later, but for now here’s part of Peter’s response to a MediaBistro reporter:

We have also been in communication with Apple … We are updating our analytics service to comply with section 3.3.9 of the Apple 4.0 PLA. We will not collect device data. All in all, the changes required to be in compliance will have little impact on the usefulness we provide to developers about how to improve their applications, and how to continue to increase consumer satisfaction.

Flurry also crafted a privacy initiative in mid-May. The company has prepared an introduction and an FAQ on its work.

No doubt both Apple and the analytics and advertising firms will claim that the no-longer-collected data won’t affect the sharpness of their insights and ad targeting. But to a software developer, access to less information and detail is never better than access to more.