CUPERTINO, CALIF. — The new Apple Watch surprised no one who was paying attention to rumors about the next big product from Apple. The company finally showed off the watch, which is coming next year, to a crowd of journalists at an event near its headquarters on Tuesday.

We got a hands-on demo courtesy of an Apple employee after the keynote event. As you would expect, it is a precisely designed and engineered gadget, with lots of little original touches that could give the wearable market for “smartwatches” the boost that it needs for mainstream adoption.  Apple Watch — which journalists had incorrectly dubbed the iWatch in advance of the announcement — is late to the smartwatch party. But it hopes to break open the category and sell millions of the devices.

“Apple Watch is the most personal device we ever created,” said Tim Cook, chief executive of Apple, at a press conference today at the Flint Center at DeAnza College near Apple’s headquarters. Apple also showed off its iPhone 6 and iPhone 6 Plus smartphones.

Apple Watch has a winder knob that resembles a mechanical watch’s knob. But this knob is a “digital crown,” which can rotate the apps that are on display on the screen. Pressing the digital crown will return you to the home screen. 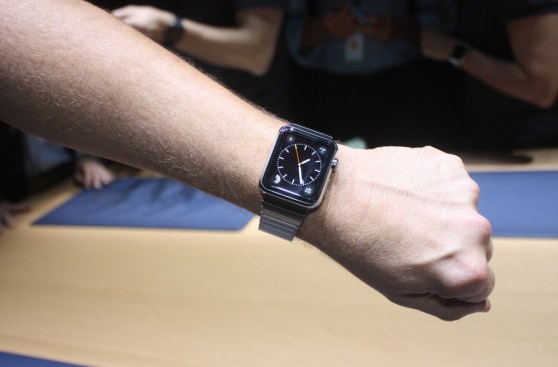 Users have a choice between two sizes, either 38 millimeters or 42 millimeters long, but the watch doesn’t feel like tiny iPhone. It has a retina screen, the same kind that Apple uses on its iPhone and iPad devices, which gives the watch a sharp resolution. If you press down on the screen and hold your finger there, you can activate different functions. That’s called “force touch.”

You can swipe sideways to look at your most important apps. And you can tap on the app to cycle through its functions; for example, you can look through your appointment calendar for the day. The watch face is customizable, you can display a basic digital readout, a butterfly, and even Mickey Mouse. You dismiss your app by swiping down.

“We thought not only of the function, but the way it looked,” Cook said.

The Apple Watch has either a polished stainless steel or a space black stainless steel case. The display is protected by sapphire crystal. Apple has multiple watch styles (specifically, three collections, six finishes, 18 bands, and 11 faces). Choinces include link bracelets, a Milanese loop, and a band made from high-performance fluoroelastomer.

The watch functions as a fitness device, using its accelerometer and gyroscope to count your steps. It also captures your heart rate, and it can tap into your iPhone to get data on your location. The fitness app tracks whether you are sitting or standing. If you move or exercise, it will track that too. You can even compare to how active you were yesterday or to your average over time.

You can listen also to music directly on the Apple Watch or listen to music stored on your iPhone.

Charging is simple: You attach a magnetic charging cable to the back of the watch face, and it attaches itself thanks to the magnetic pull. 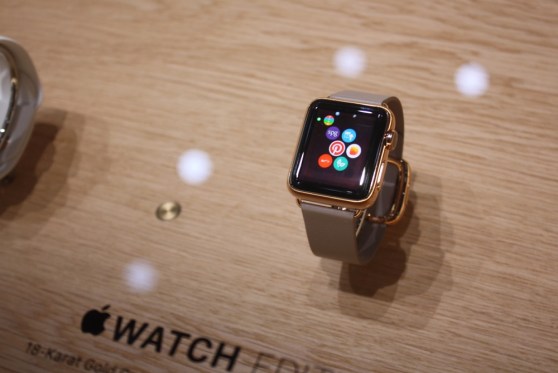 Unfortunately, you can’t get your hands on the watch until early 2015, and the watches will sell for at least $350.

Apple will provide a software development kit, dubbed WatchKit, so that developers can create their own apps for the watch.

One of the more interesting features is near-field communications, or NFC, which makes purchasing much simpler. It allows you to pay for goods simply by putting your wrist next to a payment reader. Using Apple Pay, you can pay for something with a digital wallet, which can bill the purchase to your bank account (as demoed with a Bank of America wallet) or credit cards. Your watch face or your iPhone face will alert you when the transaction is completed. 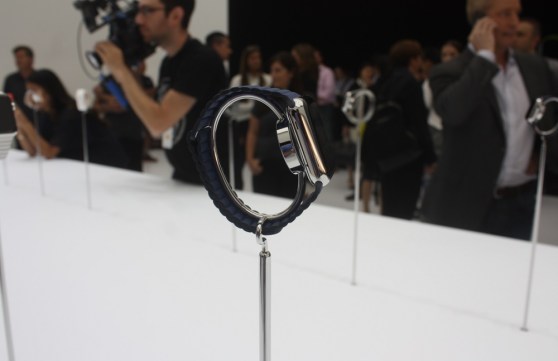 Here’s a demo of how the Apple Watch works.