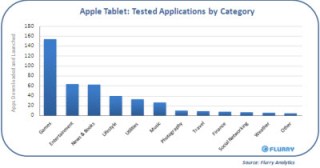 Apple has been testing 50 devices believed to be its new tablet computers, according to analytics firm Flurry.

“Apple appears to be going through its cycle of testing and polish, which is expected from any hardware or software company as it nears launch,” said Peter Farago, vice president of marketing at Flurry.

Flurry embeds its tracking code in apps that use its analytics service. Each app sends Flurry information about the device that it is running on. That’s how Flurry detected the unknown devices which it assumes are tablets.

Apple is expected to announced the new hardware device on Wednesday, Jan. 27, in San Francisco. Lots of leaks point to the tablet. Flurry said there were 200 different applications in use by the testers. Games are the number one app being tested, followed by entertainment, news and books.

Hence, these tablets are different from typical slate computers where productivity applications are most frequently used. The device is believed to have a 10-inch or 11-inch diagonal touchscreen, making it ideal for games, entertainment and electronic books. This device clearly targets consumers, based on the apps being tested. Flurry also detected a strong theme of sharing and social interaction, with an emphasis on social games, social networking, photo sharing and file transfer.

The hardware was apparently running the iPhone OS 3.2, which has not yet been released. The iPhone and iPod Touch are running OS 3.1.2. But the OS choice means the device should be able to run the 130,000 apps already available on Apple’s AppStore. The device is evidently not running the Mac OS X.