Apple CEO Tim Cook said on the earnings call that the numbers represent the strongest revenue growth rate in seven quarters for the company. He added that its earnings per share grew 20 percent over the same quarter last year. 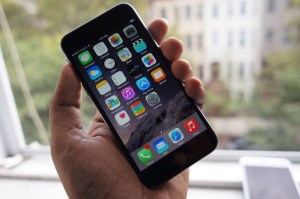 Above: All eyes were on iPhone sales during the fourth quarter, and the devices were moving quickly — even in advance of the iPhone 6 announcement late in the quarter.

Analysts had projected that Apple would sell 37 million iPhones, but the company bested expectations by selling 39 million. Before today, Apple had said only that it has sold 10 million of its new iPhone 6s during opening weekend (the new phones went on sale September 19).

If there was a disappointment today, it’s that iPad sales were well down in the quarter at 12.3 million, compared to sales of 14.1 million in the same quarter last year. Apple says it reduced its iPad channel inventory at the end of June in anticipation of the new iPads, which were announced last Thursday.

The company says its gross margin was 38 percent compared to 37 percent in the the same quarter last year and that international sales accounted for 60 percent of the quarter’s revenue.

In terms of new products, the fiscal fourth quarter was huge for Apple, and the reviews from analysts were mostly good. Aside from the new iPhone 6 and iPhone 6 Plus, Apple announced a new smartwatch, Apple Watch, and last Thursday launched an ultra-thin iPad Air 2, Retina-screened iMacs, the iPad mini 3, OS X Yosemite, and more.

Apple has indeed been on a roll during the past year, as analysts react to the company’s ability to release compelling new products in the post-Jobs era. The company’s stock has increased in value by more than 34 percent in the past 12 months and by about 22 percent since the start of 2014.

Above: Apple’s stock price rose sharply in April and has performed well ever since. The upward trend seems to follow the level of anticipation and hype before Apple began announcing new products and upgrades to old ones over the summer and fall.

Apple is forecasting revenue between $63.5 billion and $66.5 billion next quarter and gross margins between 37.5 percent and 38.5 percent.