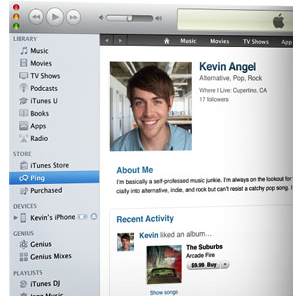 This morning at a press conference in San Francisco, Apple CEO Steve Jobs announced Ping, a social network for music that will be bundled into the next version of iTunes, its music software.

After ten iterations of iTunes, Ping marks Apple’s first step into the social realm. Jobs played it off as a simple way to discover music by following friends and artists. But he also called it a “Facebook plus Twitter for music.” With Google, Apple’s new archenemy in the mobile world, eyeing its own version of Facebook and Twitter, it’s likely that Ping is a part of much larger strategy for Apple.

iTunes has always been a hub for Apple, bringing together its devices like the Mac, iPod, iPhone and iPad, with content: music, movies, TV shows, apps and books. But while it’s great software, it has always lacked something that is a major part of the way we consume content: people.

Others have been quick to notice the gap and jump on it. Last.fm, for example, launched a social network around music many years ago which tracked and shared music you listened to on iTunes with friends. MySpace offered a way to connect people around content like music and artists, and grew into a social network of mammoth scale. While Apple products like the iPod have been a popular way to experience content in the past, the discovery of that content has often taken place elsewhere — the places where our friends hang out online.

So, Ping looks to bridge the gap between what iTunes has to offer — music — and where people discover those offerings — namely social networks.

But music is no way near the end-all-be-all for iTunes: The store sells everything from movies to TV shows, podcasts, books/audiobooks, and apps today.

This means that Apple would be short-sighted in looking at Ping as just a music-discovery tool. More likely, it sees it as a way to get serious about social, something it has never paid much attention to. It’s mastered the technology, the content, and now, it is going after the most important layer: people.

Today, on its launch date, I can follow my friends and artists on Ping, see the kind of music they’re consuming, and what they have to say about it. But in the future, it’s inevitable that I’ll also be able to see the movies and shows they’re watching, the books they’re reading, and the apps they’re using. In other words, it’s a social network based around content and consumption, not status and comments.

This should be news to Facebook and MySpace. The former has tried to be a neutral platform for sharing content, while MySpace, with an early lead in Hollywood’s movies-and-music scene, has tried to reinvent itself around the “socialization of content.” But with 160 million users and millions of songs, movies, shows, apps, and books, Apple has a far more direct connection with content. On Apple’s products, people don’t just talk about content. They consume it. And, intriguingly, they pay for it — something that social networks have struggled to capitalize on, often by sending people to iTunes to buy content, in exchange for a share of the sale.

There are implications for other players besides Facebook and MySpace. When giants fight, startups get trampled. Blippy, a service that tracks purchases, lets you see what others are buying on iTunes. Miso and Tunerfish, two startups in the social TV space, let you track what friends are watching. If Ping were to start tracking activity other than music, there would be little incentive to use such services.

Apple must surely be thinking it’s time to cut out the middlemen. Who needs partners when you’ve got 160 million friends?