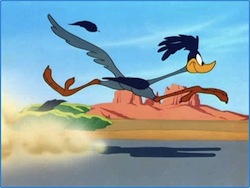 Apple has been consistently beating analyst expectations for its financial performance, and its most recent numbers were no exception.

The company’s ‘s fourth quarter  ended on Sept. 26, and the company says it made $9.87 billion in revenue during that period. That is up 25 percent from a year ago and far above analysts’ expectations of $9.2 billion.

The main factor in the numbers seems to be still-growing demand for Macintosh computers and iPhones. Mac sales were up 17 percent from last year, with 3.05 million sold, while iPhones were up 7 percent, with 7.4 million sold. (The release of the Snow Leopard operating system and the iPhone 3GS probably helped.) The Mac is evidently gaining market share, since IDC projected that the PC market would grow only 2 percent in the third quarter. So the Mac business continues to do great. On the other hand, iPod sales fell 8 percent to 10.2 million units.

As of 2pm Pacific, Apple shares had increased by more than 7 percent, to $203.30, in after-hours trading.