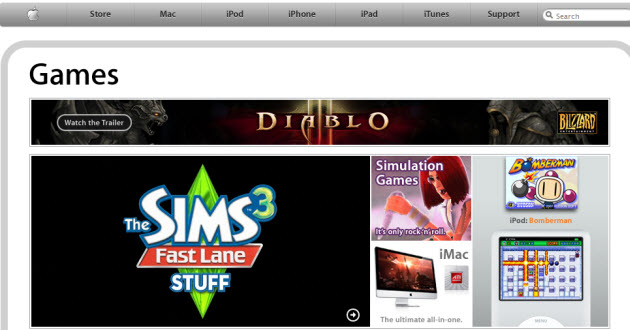 Apple has quietly set up a game-related section on its web site. That may be a sign that the company has finally decided that games are a big part of its future.

[Update: I’ve been told that the site has actually been around since the late 1990s and just got noticed by another publication yesterday. I haven’t gotten an official comment from Apple yet.]

The games section is fairly Spartan, compared to the colorful and video-laden styles of most game news and review sites. But it makes sense, as Apple’s devices are increasingly being used as platforms for playing games. The iPhone, iPod Touch, and iPad in particular are winning over lots of gamers who once played games on the Nintendo DS or Sony PlayStation Portable. They’re draw by the touch-interface, motion-sensing control, cool graphics and portability of the devices — not to mention the free or 99-cent prices.

It’s about time that Apple highlighted games, wouldn’t you say? The App Store has 47,624 games on it, according to Mobclix. Games are vital to Apple’s mobile ecosystem. Apple realized that and launched Game Center, to boost social sharing of games and to help with discovery of the best content. Now, with this new web site, Apple can do an even better job of showcasing content. That, in turn, will draw more developers and publishers to the Apple platforms.

The game web site includes suggestions, top lists, peripherals, and recommendations for specific Apple devices. Users can watch game videos and purchase games directly from the App Store. The site is currently written by contract writer Brad Cook. I’ve been told the below information was wrong:

I guess we’re finally clued in now on why Apple hired Matt Casamassina, an editor at News Corp.-owned video-game website IGN, to spearhead editorial content for iPhone and iPad games on the App Store. It looks like he can apply his talents to figuring out how to display games on Apple’s web site as well.