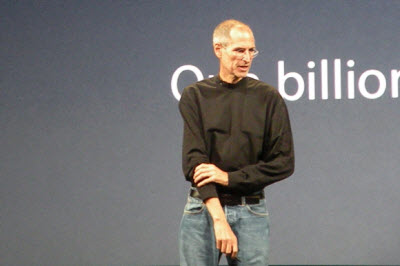 Today’s 5 O’Clock Roundup post will stand aside for a special all-Apple edition right now. Here’s a summary post about how we felt about Apple’s press event in San Francisco today and links to our coverage.

Steve Jobs made his biggest impression at Apple’s event today simply by showing up. We didn’t get The Beatles, as rumored, but we did get silky voiced Norah Jones. Jobs seemed touched when he got a standing ovation while he walked up on the stage at the Yerba Buena Center for the Arts theater. I was less than 10 rows up, watching him with fascination. He talked about how he now had the liver of a 20-something-year-old who died in a car crash and how we all should be organ donors. The crowd responded again with great clapping.

But there weren’t many roars of applause during the rest of the event. Apple launched its new iPhone 3.1 software to fix bugs and incorporate new features such as the Genius recommendation engine for apps. It launched some new features for iTunes, such as iTunes LP, where you can explore more data about a song or album you’re interested in. When we interviewed Bart Decrem, chief executive of Tapulous, he was excited about the chance to get more game sales via Genius app recommendations. Tapulous was among the games that Apple celebrated as it noted there are far more games on the iPhone and iPod Touch than on the Nintendo DS or Sony PlayStation Portable.

It also cut prices on its line-up of new iPods, which had more storage capacity for the same price. And it introduced a new iPod Nano with features such as a video recorder, an FM radio, a pedometer, and a voice recorder. Those features should be enough to fend off Microsoft’s Zune HD, which has HD Radio built into it. The Zune HD is coming out later this month, but Microsoft’s Zune music players have a depressingly small 1.1 percent market share.

VentureBeat’s Paul Boutin was surprised there was still no camera on the iPod Touch models. We closed out our coverage with a photo gallery of the event.

Apple disappointed some of the rumormongers because it had nothing to say about wildly innovative but implausible announcements that had been dreamed up in the press. The coincidental launch of The Beatles Rock Band today and the release of remastered CDs for the Fab Four had led many to believe that The Beatles songs would now show up in Apple’s iTunes Store. No such luck. Microsoft, of all companies, has upstaged Apple, snaring the surviving Beatles at its June E3 press conference and getting their songs in digital form on the Xbox 360 (the game is also on the Sony PlayStation 3, Nintendo Wii). And there was no Apple TV remake, no Apple tablet computer, no record label, and no Rolling Stones. Even Jobs can’t make everything happen in a day, I guess.