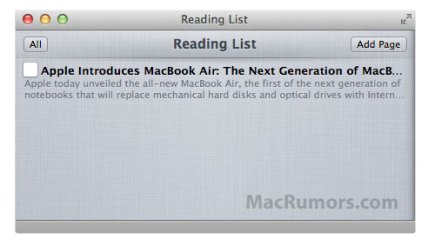 Apple is working on a feature called “Reading List” for its Safari web browser that will let users save stories to read later — pretty much the same thing that Instapaper and ReadItLater are doing now — reports MacRumors.

If that’s the case, the feature spells trouble for Instapaper and ReadItLater, both of which have gathered millions of users thanks to their synchronized bookmarking implementations. Instapaper developer Marco Arment doesn’t seem too worried, though, saying on Twitter, “For many reasons, I believe Instapaper would still have a market even if Apple implemented Reading List synced to iOS devices.” He also said it appears the feature is more closely imitating ReadItLater at the moment, which isn’t as feature-rich as Instapaper.

The news comes only a few days after Arment said he will retire the free version of Instapaper on the iPhone and iPad, leaving only the $4.99 version on the App Store. Instapaper sales will definitely be threatened if Apple ends up making Reading List a way to synchronize pages to read across its devices.