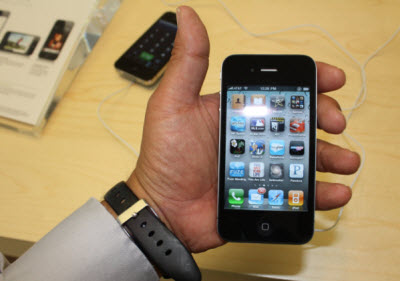 Apple’s stock price fell 3 percent on Tuesday after Consumer Reports gave a negative review of the iPhone 4 because of its reception problems.

Consumer Reports, an influential and trusted independent publication, confirmed that the iPhone 4 has reception problems when it is held in the wrong way, thanks to the design of the phone’s antenna. That’s a big problem for Apple, since the iPhone 4 is its hottest-selling phone ever.

In the wake of the Consumer Reports review, experts speculated that Apple would have to recall the units it has sold to fix the antenna problem, which may be more complicated than the software fix that Apple talked about on July 2.

The iPhone 4 sold 1.7 million units worldwide in its first three days, but many users reported dropped calls when they held the bottom of the phone’s metal siding with their bare hands. Apple suggested users were having problems because the reception indicator on the phone was not being accurately measured, partly because AT&T had changed the formula used for calculating how many bars of reception a user had in any given location.

But Consumer Reports said that the AT&T issue was not necessarily the main culprit and that it could be a hardware problem. A hardware problem would be much worse for Apple because it would necessitate a recall and a redesign. Apple has not yet commented on the Consumer Reports review, and it also deleted comments on the subject on its support pages.

“Apple will be forced to do a recall of this product,” said Professor Matthew Seeger, an expert in crisis communication, in a report by CultofMac.com. “It’s critically important. The brand image is the most important thing Apple has. This is potentially devastating.”

It will be interesting to see what Apple chief executive Steve Jobs says about this issue. He has been strangely quiet.