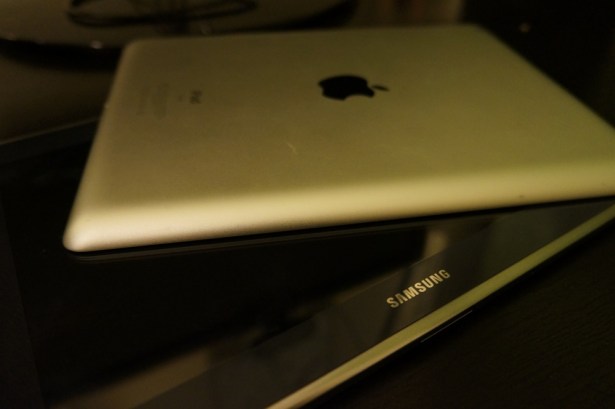 At the time of this post, Apple’s stock has come back down to $676.56, but that’s still higher than the former record stock price for the company of $674.88. Samsung’s stock price, meanwhile, fell 7 percent when it began trading in South Korea this morning.

Update: Apple’s stock closed at $675.68 today, still above its past high before today.

The numbers aren’t too surprising, given just how thoroughly Apple trounced Samsung in their San Jose, Calif. patent trial. The jury found that Samsung willfully infringed on Apple’s patents and ordered it to pay more than $1 billion in damages. Notably, the jury also didn’t buy Samsung’s arguments that Apple infringed on its 3G patents.

Speaking to press over the weekend, Apple v. Samsung jurors said they felt Samsung wronged Apple after the first day of deliberations, and they wanted to make sure Samsung’s punishment “was not just a slap on the wrist.”

Next up in the Apple v. Samsung saga, Judge Koh has scheduled September 20 for an injunction hearing, where we’ll see if any Samsung phones will be banned from sale in the U.S. We’re also expecting a concerted appeal effort from Samsung to reduce those damages (while Apple could argue to triple them).