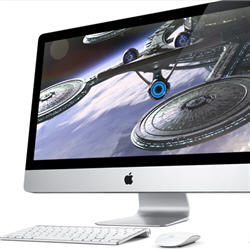 Apple has had problems with the state-of-the-art LED-backlit displays on its king size 27-inch iMacs. Now, HardMac is one of the sites reporting that, “According to one of our sources, the company completely stopped the iMac 27-inch assembling lines.”

The big Macs had, according to many customer posts on the Internet, exhibited two kinds of problems. First, the displays were seen to both flicker and flash, and to distort the onscreen desktop image.

Customers then began reporting that their 27″ displays had a yellow tinge that they could not ignore.

The models affected sell for $1,700 to $2,000 base price. Netbooks they are not. Apple is normally known for the well-above-average quality of its displays. So customers expect flawless performance. The display problems are bad enough for the company’s reputation that ceasing production until they are fixed seems the smart move.