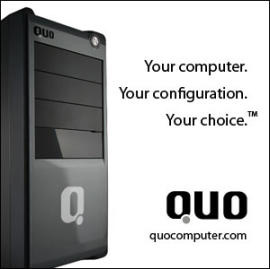 Quo’s three models — named Life Q, Pro Q, and Max Q — will probably start at less than $900 for the Life Q, according to a CNET report. The store, scheduled to open Monday, July 1st, is at 2401 West Main Street in Alhambra, just outside downtown LA.

Quo founder Rashantha De Silva claims to be a Mac user since 1984, the year the model was introduced. “They probably will (sue us),” De Silva told CNET. “There are others doing this, but we have a different attitude. There are thousands of people in the ‘Hackintosh’ market, but many of them are creating bad products.”

De Silva’s stated plans are to offer Mac-alike functionality at recession-friendly prices. Apple’s higher-than-average prices have been the target of a series of Microsoft TV ads. (And Apple has crafted its own response video.)  For comparison, the lowest priced Apple notebook computer lists for $999. A desktop Mac Mini, at $599, lacks a display, keyboard or mouse.

Quo has not released enough specifications yet to make a straight comparison. Check back on Monday.