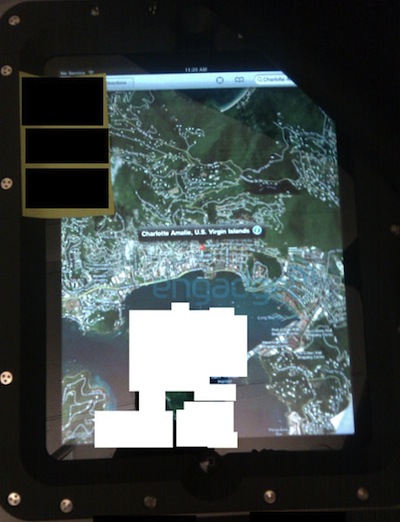 Plenty of fake photos have popped up of Apple’s tablet device, which it’s supposed to be unveiled later this morning. Now Engadget has a new batch of pictures sent from a tipster, which Gizmodo deems “the most likely suspect” among the photos the public has seen so far.

Well, we’ve heard from a source with inside knowledge that this is the real deal — the fabled tablet. Of course, you can’t actually make a whole lot out, what with the blur and the blocking out of parts of the device, but it seems to resemble a giant iPhone, particularly with its “home” button at the bottom and the Safari mobile web browser open. That’s not too surprising, especially since McGraw-Hill CEO Terry McGraw confirmed on CNBC that the tablet will run a version of the iPhone’s operating system. (He was also the first to officially confirm that the tablet exists.)

Of the parts of the photo that are clearly part of the tablet and not whatever it’s encased in, that home button is the most obvious element that wasn’t present in the photos that leaked late Monday, suggesting that those were fakes.