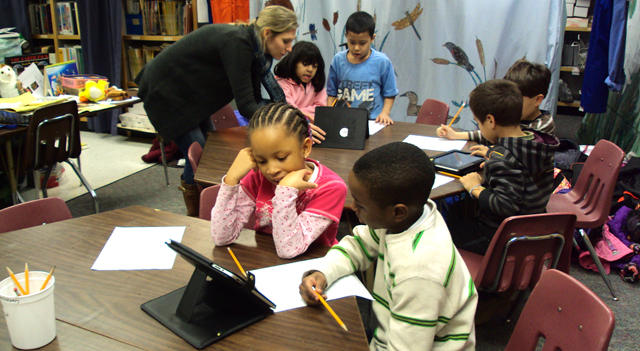 When Apple announced its textbook initiative on Thursday, there was a rush of excitement among educators. Textbooks from major publishers, which can cost $40 to $75 dollars in print, would be available as interactive e-books for $15 or less. The new iBooks Author application could turn anyone into a publisher, with its simple interactive e-book creation tools.

But then there was the small print: In order to buy and read these textbooks, each student will have to own an Apple iPad. No computer, off-brand tablet, or even iPhone or iPod touch will work. Books made with the new iBooks Author application are only viewable on iPads in the iBooks 2 app, can only be sold through Apple’s iBookstore (where the company takes its customary 30 percent of the sales cost), and cannot be exported as ePubs, the standard open format for all e-book files.

For the schools that can afford iPads, Apple’s new apps and partnerships are brimming with potential.

“We looked at each other after the announcement, and said ‘Apple must have been reading our minds. This is exactly what we’ve been talking about,'” said Eric Spross, director of technology at the private Menlo School in Atherton, Calif.

Menlo School’s iPad pilot program has been in place for more than a year. All eighth and tenth graders are given an iPad for the school year, and though the school owns the tablets, the kids have full custody and can take them home.

“We felt that laptops and desktops focus students too much on the technology and not enough on the content or communication with another human,” said Spross. “We choose iPads because they’re lightweight, portable, have a long battery life, and are self-service. They’re easier to support.”

Apple’s education announcement was the missing piece in a puzzle for Menlo School. Even though it already had the iPad program, its devices hadn’t made the leap to being e-readers due to a dearth of e-textbooks. Apple’s new partnerships with publishers Houghton Mifflin Harcourt, McGraw-Hill, and Pearson will fix that.

Teachers were streaming some iTunes U content, but not much since publishing was limited to university-level courses. Now iTunes U is open to high schools, and a new iTunes U iOS app makes the content accessible from anywhere. Interestingly, Spross said teachers were also eager for a way to create and share their own lessons and books, which they can do on iBooks Author (as soon as they upgrade to Lion).

Tuition for Menlo School is $34,900 year. The school purchased all the iPads at full price from its own technology budget.

Not every school is so fortunate.

“We don’t really have a technology budget,” said Maria De La Vega, superintendent of the Ravenswood public school district in East Palo Alto, Calif. (not far from Menlo School, and a mre 30 minute drive from Apple HQ). “Most of what we’ve been able to acquire has been through donations and leftovers from offices closing down.” HP donated a number of small laptops to the district, so there’s now one computer for every sixth to eighth grade student. But those devices will be unable to read the new digital textbooks or any content created with iBooks Author.

The iPad is currently the most expensive consumer tablet on the market, starting at $499. While Apple is bringing down the prices of iPad-only textbooks, the company does not offer any known discounts on its iPad, iPhone, or iPod touch hardware to educational institutions, even for bulk orders.

“I’ve heard of the Kindle and the Kindle Fire, and I understand that they’re not as expensive. But I don’t know if they’re compatible,” said De La Vega optimistically (they’re not). While she thinks e-textbooks are a great idea for saving money, she is realistic about the challenges of making the switch.

“We’d have a lot of questions about how they would work, like security and what grade level they’d be most successful with. We’d need to make sure our staff is well trained, to utilize and make the most out of the program,” De La Vega said.

The nearly 100,000 U.S. public schools face restraints beyond money. They are also bound by state and federal regulations that dictate what books they use and what they can spend money on. Unless the full, approved list of school textbooks are made available on the iPad, these schools wouldn’t be able to use textbooks based on the Apple tablets even if they could save money that way.

“Teachers in private schools can select their own textbooks. Public schools can’t. That’s a distinction that’s larger than having iPads or if they can afford the technology,” said Menlo School’s Spross. He pointed out that it’s not all bleak for public schools: “Some of the most compelling and innovative work has been in public schools, in very scientific, state-sponsored programs.”

The iPad restriction is odd for another reason: Tying a file to one piece of hardware (in this case, a textbook to an iPad) is a step backward for a company that knows the future lies with accessing your data from multiple devices. Toward that end, Apple was an early adopter of cloud storage for consumers. Steve Jobs unveiled the company’s iCloud service in June 2011, which enables you to store music, books, photos, contacts, calendars, and more in the cloud.

Cloud storage might make the difference for e-textbooks, too. Only when public schools can put $15 e-textbooks on donated laptops, inexpensive e-ink readers, smartphones, and whatever devices students may already own, can Apple’s textbook “reinvention” be taken seriously by public schools.

Additionally, Apple should update its iBook Author application export to the more universal ePub 3 format and rewrite the iBooks Author end user license agreement so that books made with the application can be sold anywhere. (Can you imagine if music made in Garage Band could only be sold in iTunes?)

Until then, there are other great projects successfully using technology to bring affordable and free education to kids who wouldn’t normally have access to it. The One Laptop Per Child organization unveiled its sub-$100 X0-3 tablet at CES this month. The Khan Academy has more than 2,700 free online video classes on everything from Michelangelo to microeconomics. In India, the government has created the $35 Aakash tablet which will be used to educate underprivileged kids. And Apple of course offers iTunes U, a huge collection of free lectures and courses from top universities.

At Menlo School, Spross is already busy figuring out how to best use the new Apple products, which were the missing piece in the school’s technology puzzle. “Without this last piece it was, ‘Wow, great gizmo with a lot of potential, but does it mean anything?'”

But for most public schools, the iPad will continue to be a missing piece.