Apple Music. iCloud. Apple Pay. App Store. These are some of the well-known products that fall into Apple’s otherwise amorphous Services product category, which in the quarter ending on December 31 generated more than $7.17 billion.

That might not sound like much when you note that Apple captured more than seven times that — $54.37 billion — in iPhone revenue in the quarter. But! Apple wants to really grow the Services business. Specifically, the company is seeking to double the category in the next four years, chief executive Tim Cook told investors on today’s earnings conference call.

In fact, Apple Services came through with more revenue growth than all other product categories in the most recent quarter: 18.4 percent. The iPad was the worst performer growth-wise, with a 22 percent decline. The Other Products category, which includes the Apple TV, Apple Watch, Beats, and iPod, saw an 8 percent revenue drop. The iPhone, for all the money it delivers Apple, saw 5 percent revenue growth. 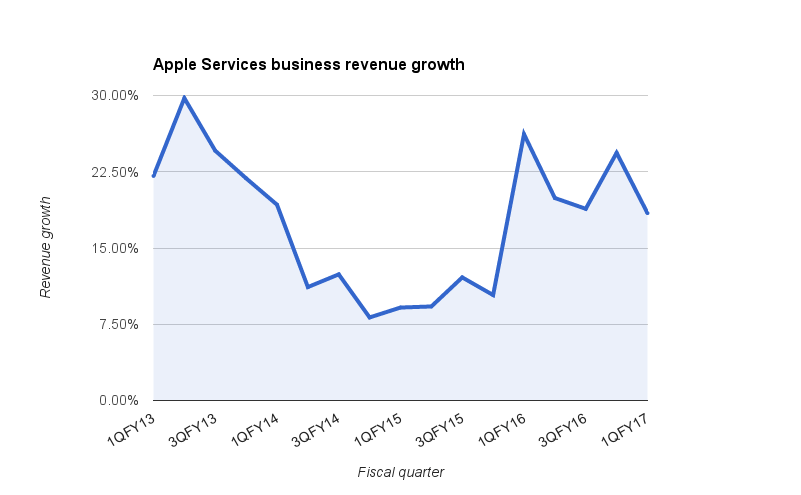 Above: Apple Services revenue growth going back to 2013.

Also, while you could say Apple Services is a small base relative to things like iPhone and so will have a larger percentage growth, with the exception of things like Apple Pay and Apple Music, many of its components have been around for several years now. And besides that, $7+ billion in revenue is not small. At that size, it’s doing as much business as a Fortune 100 company, as Apple chief financial officer Luca Maestri pointed out during today’s call.

To be clear, Apple top executives haven’t given up on hardware, which is ultimately the company’s golden heritage. Despite today’s results, Cook said that he’s still optimistic about the iPad — and that he believes “the smartphone is still in the early innings of the game.” But that’s not to say Apple isn’t trying to figure out how to adjust its priorities in the years to come in order to reap the best results.

Given the Services goal unveiled today, things like exclusive music and video content and iCloud enhancements will become more important. As people buy more Apple devices, the services will likely become more widely used, and people are spending more on them, too. “Obviously the quality and the quantity of content that we make available in our services improves all the time,” Maestri said.

At the same time, Apple may well decide to bring more of its applications — like iMessage and Apple News, and even its Xcode integrated development environment (IDE) — to non-Apple hardware. Microsoft’s Office apps work well on Apple’s mobile devices. Google has made sure that its most popular applications work well on iOS. Perhaps Apple will start reciprocating more.

Lest we forget, in the words of Marc Andreessen, “Software is eating the world.” That even applies to Apple.