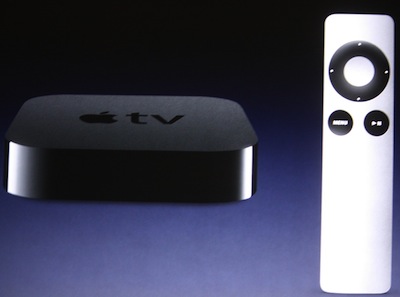 Apple chief executive Steve Jobs demonstrated a new version of Apple TV this morning that’s aimed at turning the device from a “hobby” (as Jobs has described it) to a formidable piece of the company’s product lineup. How did he do? Well, Forrester analyst James McQuivey doesn’t sound impressed.

McQuivey emailed a statement to VentureBeat that honed in on one of the most disappointing aspects of the announcement — that Jobs hasn’t persuaded many TV networks to follow his vision for cheap episode rentals. Jobs said today that Apple TV will rent episodes in HD video for 99 cents, but only ABC and Fox are on-board with this plan for now.

“To get the rest of the market to pay attention, Apple has to offer more of what people want in the living room: more TV shows,” McQuivey said. “Yet only ABC and Fox have agreed to let Apple rent their TV shows; meanwhile the Apple TV becomes merely one of dozens of devices -– some even cheaper than $99 –- that can stream Netflix videos to the living room.”

Just because Jobs hasn’t brought everyone on board with the initial announcement doesn’t mean it won’t happen eventually. Over time, he has succeeded in bending record industry executives to his will, and the same could happen here. And even though McQuivey said the product unveiled today isn’t a home run, he acknowledged that it has potential, and not just because Jobs could recruit more networks:

The most important hint of Apple’s real ambitions in the living room come from AirPlay, which puts iPhones and iPads in the driver’s seat and makes the TV just an output device for the Apple ecosystem. Expect Apple to gradually push more and more in that direction, but as of this moment in 2010, Apple has not yet made a significant play for control of the TV.