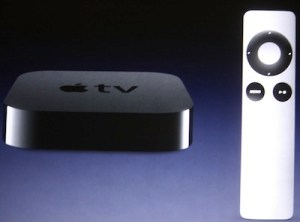 In August, we reported on rumors that Apple was plotting its own streaming video service to compete with the likes of Netflix and Amazon. The service, called iTunes Replay, would make use of Apple’s recent advances into the cloud by allowing iTunes customers to stream movies from Apple’s servers and re-download them to other devices, (such as Apple’s $99 Apple TV set-top box). Apple was reportedly negotiating with several major movie studio for licensing agreements. So, it’s reasonable to presume that Apple was also discussing agreements with TV networks like CBS.

Moonves said the network turned down Apple’s proposal to bring CBS content to its new service because the deal involved splitting the advertising revenue over time. This type of deal is very similar to the agreements Hulu has with ABC, NBC and Fox. Moonves said CBS’ strategy is to obtain money from streaming media providers upfront in exchange for a licensing agreement, which is why you’ve never seen CBS shows on Hulu.

Until recently, CBS’ strategy meant it was missing out on lots of potential revenue. However, the network recently reached streaming agreements for its older TV content with both Netflix and Amazon, which guarantees CBS money upfront in exchange for the licensing. CBS also recently reached a similar agreement with several service providers for licensing rights to CW programs, which CBS jointly owns with Time Warner. Moonves said the network is receiving “hundreds of millions of dollars” from streaming media providers, such as Netflix, Amazon and Hulu.

As for the credibility of Moonves’ comments about the Apple TV ad-supported service, it wouldn’t be the first time he’s unintentionally revealed information during an earnings call. GigaOm’s Ryan Lawler points out that Moonves also leaked information about a CBS content licensing agreement with Netflix’s Latin American market a full month before Netflix officially announced its international expansion.

Obviously, we don’t know if Apple is still working on a streaming video service. If the service is ad-supported for television content, that would explain why the company is hesitant to add access to Hulu Plus on the Apple TV.