Apple may have fixed the MacBook Pro’s lawsuit-inspiring keyboard in its just-released 2018 model, but it will keep repairing defective 2016 and 2017 laptops using problematic older components. MacRumors reports that Apple is describing the third-generation butterfly keyboard as “exclusive to the 2018 MacBook Pro,” which is unfortunate, as a new design appears to address the prior models’ biggest problem.

Although Apple described the new MacBook Pro’s keyboard solely as “quieter” than its predecessors, a teardown by iFixit revealed that each key now has a silicone membrane hidden inside. The membranes make the keys quieter, but can also prevent dust and other particles from damaging key mechanisms, an issue that has recently led to class action lawsuits in earlier MacBooks. As iFixit notes, Apple recently patented the membrane concept not for its noise-dampening effect, but for preventing “contaminant ingress.” 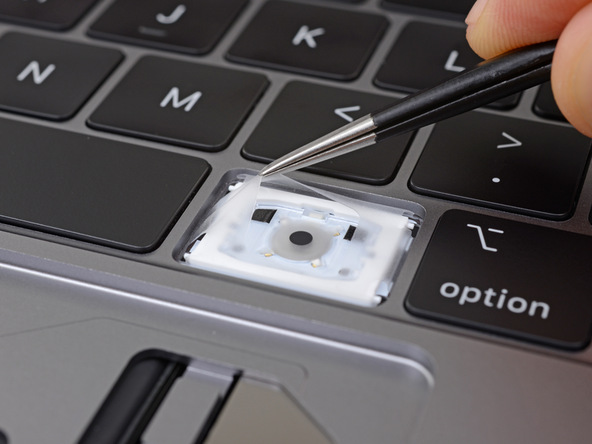 Superficially, replacing the keyboard of an older machine with the newer one could be possible, as the new MacBook Pro’s dimensions haven’t changed. But Apple designs its keyboards as one component of what it calls the laptop’s “top case,” a large assembly that notably includes a glued-in battery. Since the 2018 model’s battery is notably larger than before, simply replacing the keyboard within the top casing of an older model might not be an (easy) option.

Matthew Taylor, who started a petition to compel Apple to address its keyboard problems, has described the 2018 keyboard as “precisely as unreliable as the 2016 and 2017 models.” It may remain unclear for some time whether the new silicone inserts actually remedy problems over the long term.