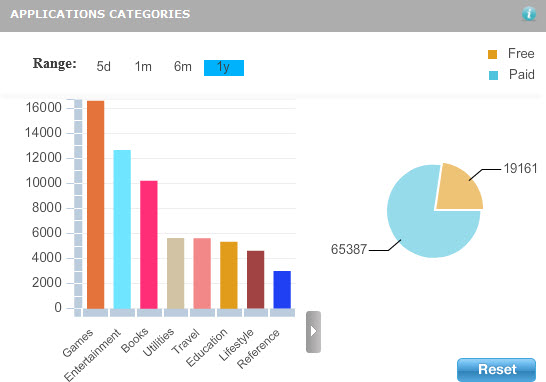 Apple announced this morning that users have downloaded more than two billion apps from its AppStore in the past couple of years, and that the number of apps now tops 85,000.

The rate of change is pretty astounding for a consumer product. It raises the question as to whether anyone can catch up with Apple in smart phone apps.

“The rate of App Store downloads continues to accelerate with users downloading a staggering two billion apps in just over a year, including more than half a billion apps this quarter alone,” said Steve Jobs, Apple’s chief executive, in a statement. “The App Store has reinvented what you can do with a mobile handheld device, and our users are clearly loving it.”

Apple said the iPhone and iPod Touch are available in 77 countries. The apps fall in the 20 categories, with games coming out as the most popular category. Analytics firm Mobclix (source for chart) lists 65,387 paid apps and 19,191 free apps. It says there are 11,908 paid games and 4,661 free games.