Not so many years ago, China looked like the key to Apple’s future. Now this massive market feels increasingly like an albatross.

In reducing guidance, Apple CEO Tim Cook said yesterday that the company’s shortfall in the December quarter was almost entirely due to the Chinese market.

“While we anticipated some challenges in key emerging markets, we did not foresee the magnitude of the economic deceleration, particularly in Greater China,” Cook wrote in a note to investors. “In fact, most of our revenue shortfall to our guidance, and over 100 percent of our year-over-year worldwide revenue decline, occurred in Greater China across iPhone, Mac, and iPad.”

Rather than a sudden change in fortune, this news indicates that Apple’s turnaround in China in the 2018 fiscal year may have simply been an aberration. After a massive revenue spike in 2015, the company saw sharp revenue declines in 2016 and 2017, including six straight quarters in which sales fell year-over-year.

But by end of FY 2017, and throughout 2018, it seemed Apple had regained its footing in China. 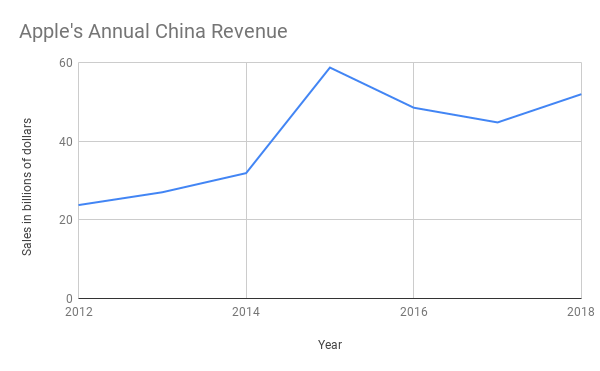 Cook notes that Apple’s user base continues to grow in China and that the company will report record App Store sales in the country this quarter. And part of the blame for the recent miss can certainly be attributed to a softening economy, probably exacerbated by the trade spat with the U.S.

But beyond that, the fundamental smartphone trends have been going against Apple for several years.

Apple is only the fifth largest seller of smartphones in China, holding about 9 percent of the market, according to research firm Counterpoint. That leaves it behind local brands such as Huawei, Oppo, Vivo, and Xiaomi. There has been general frustration with the soaring costs of iPhones. And while Cook complained about carriers reducing subsidies, that is something all brands face as smartphone sales in China have softened over the past year.

Huawei, in particular, is competing at both the high end and the low end, and the company just bragged that it sold 200 million smartphones worldwide amid a 21 percent sales increase for 2018. Of course, Huawei sells networking gear, so it’s not exactly a direct comparison in terms of business models.

It also doesn’t help that Apple has failed to make a dent in other critical markets, such as India.

Meanwhile, investors are getting increasingly nervous. They look foolish now for having bet so heavily on the company just a few months ago, driving it past the $1 trillion valuation last summer.

Cook insists he remains bullish on Apple’s prospects in China. But more than seven years into his tenure as CEO, the region poses a tough puzzle with few solutions in the short- or long-term.