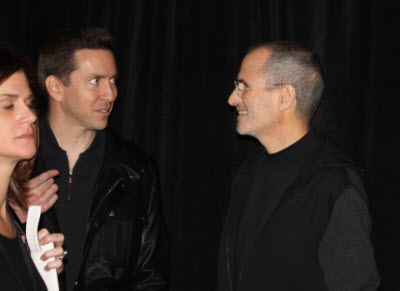 The iPad announcement from Apple today managed to take a lot of people by surprise, in spite of all of the pre-event speculation. And the crowd that saw the device up close was impressed with the design, quality, price, business strategy and versatility of its iPad.

In other words, if Apple executes on its plans, it will have another runaway hit. Based on interviews today and my own observations of playing with the device in my own hands, I expect that Apple’s new device is going to completely overshadow all of the dozens of other tablets in development.

I was surprised at how much Apple packed into the 1.5-pound device, which has a 9.7-inch screen. Steve Jobs was right when he said it simplifies a lot of daily computing tasks. It does a great job at displaying news sites, showing pictures, running videos, displaying electronic books and playing games. The device has a big multitouch screen that makes it easy to purchase digital content directly over an Internet connection. The screen was very responsive to touch. If you swiped sideways on the screen, you could make the screen switch to a new image or page quickly. Of course, the quality of an Internet connection will determine how fast web pages load.

The presence of an accelerometer, or tilt control, will also be a big boon for game developers who want a device that can be easily controlled. 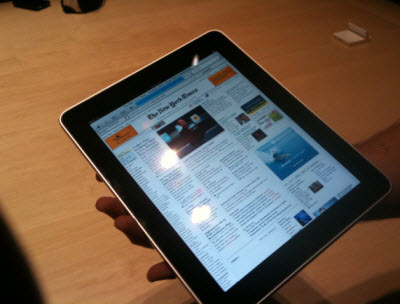 “This confirms the iPad will turn our laptops into the rotary phones of the future,” said Shervin Pishevar, executive chairman of SGN, which makes iPhone games. “I can see people using it for books, games, and watching videos. I can picture using it to watching entertainment in bed.”

The $499 price was one of the biggest surprises, since early leaks suggested the tablet computer would sell for $999. To get a 3G-capable iPad, the price will be more like for $629 for those who want a 16-gigabyte version with 3G connectivity. The data plans were also priced aggressively at $14.99 a month for 250 megabytes of data a month and $29.99 a month for unlimited data.

The data plans do not require a contract and can be canceled at any time. The overall pricing strategy should make the device far more affordable to the mainstream consumers, and it will put lots of competitive pressure on netbooks — which are web surfing devices that are smaller than laptops — which do far less than what the iPad can do.

“I was stunned at the price,” said Nathan Brookwood, an analyst at Insight64. “The performance looks pretty good too. The iWork stuff looks good. Using it with a keyboard dock is fantastic. I’d like to see if you can take handwritten notes on the tablet surface. I’d also like to see if you could annotate books. They didn’t talk about that.”

Many of the rumors talked about how Apple’s new tablet would be meant mainly for reading electronic books. Clearly, it can do a lot more than that. But the book-reading app is particularly well done. Apple has signed up five major publishers who can provide books to Apple in the ePub format, which is widely used. It will thus be easy for Apple to amass a million or more eBooks for consumers to download to the device. You can swipe your hand on the screen to purchase books and download them over a 3G connection or a Wi-Fi connection. The book reader function can display color pictures embedded within books, or even videos. There is a cute page-turning animation that shows when you flick your finger to turn the page. And you can also view Adobe PDF documents, or change the font of the book to suit your eyes.

Jobs said that the company built the book reader on the shoulders of pioneers like the Amazon Kindle, but the iPad clearly surpasses the eBook experience on those earlier devices. 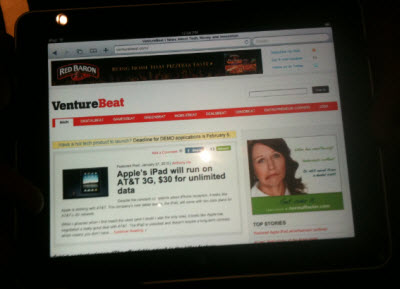 The newspaper reading experience is great. You can fit the whole front page of the New York Times on the tablet’s screen, and it’s very easy to move up and down, or from side to side, using your fingertips. As long as the web page loads fast (which, while on-stage, it did not during one of Jobs’ demos). Other web pages, such as the VentureBeat page on the right, look great. It’s a treat to see so much real estate on a page at the same time, compared to other mobile devices. And that will be great for the discovery of new content, said Jason Citron, co-founder of Aurora Feint.

There are definitely other things that are missing. It looks like there is no voice phone capability. And Apple didn’t say if you could use a voice-over-Internet-protocol (VOIP) app such as Skype. Apple didn’t talk about global positioning system (GPS) navigation services, though it did show off mapping services such as Google Street View. And it looks like there are no webcams or digital cameras built into any of the models. The device is also locked down. It has no universal serial bus ports or SD card slots, and it won’t run Adobe’s Flash software.

Tim Bajarin, an analyst at Creative Strategies, said he agreed with Steve Jobs’ assessment that the iPad will have the advantage of having the iTunes ecosystem behind it. Jobs said there are 75 million people who already know how to use the iPad because it uses the same kind of touch-based user interface as the iPod Touch and iPhone. There are 125 million iTunes accounts that people have used to make digital music or other entertainment purchases. The new iBook store operates so similarly to iTunes and the AppStore that it isn’t that hard to learn. This ecosystem of services, software, and hardware adds up to a huge advantage that Apple will have against other tablet computers, which are built by alliances of companies, rather than just one vendor.

Michel Guillemot, chief executive of Gameloft, said that his company will develop games that are tailored for the iPad format, which has high-definition screen resolution (720p).

“We want to make the best possible experience for gamers and create brand new, innovative games for it,” Guillemot said.

At the same time, consumers can use any of the 140,000 existing iPhone apps that run on the device. Older iPhone games will look pretty good on the device because the iPad can take each pixel in the old game and double it so that the game can fill the larger iPad screen without looking blurry. That works pretty well, but if you look close enough you can see that there are some pixelated sections of the games. So it’s definitely not as perfect as the 3-D graphics on game consoles such as the Xbox 360 and the PlayStation 3 which can display at 1080p resolution.

Ge Wang, co-funder and chief technology officer of Smule, said that he was fascinated with the device, the same way he was with the original iPhone. Smule made innovative music apps such as Ocarina and Leaf Trombone for the iPhone. Wang said his team would explore making unique apps that take advantage of the cool new features on the iPad. He said he was excited that the screen was big and beautiful enough to be immersive, something that draws you in close. 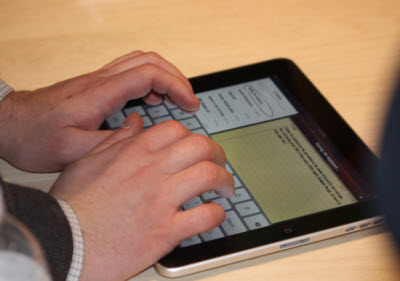 Typing on the virtual keyboard for the iPad is a breeze. It’s almost like typing on a laptop keyboard, though of course you don’t get the tactile feedback when you type on a touchscreen. It is far better than typing on an iPhone, of course, because the screen is so big and the letters are large. If you are a touch typist, you can pretty much type without making errors.

The only question is whether consumers will buy a device that is something new in their lifestyle. As Jobs pointed out himself, the iPad is neither a smartphone nor a laptop. It exists in the No Man’s Land between those devices where lots of other gadgets have tried but failed to attract consumers.

One of the best things about this device was the iWork suite. You can run those applications, normally reserved for the Mac, on the iPad. But the striking thing is that you don’t just view these apps. On the tablet, you can also use them to create new documents, from spreadsheets to presentations. These iWork apps are priced at $10 each, pretty disruptive for rivals like Microsoft, which charge far more for the Office suite. The important thing here is that the iPad is not just a viewing device. It can also be used to create things. The Brush painting program is a case in point. You can use it to decorate famous paintings or create your own. And it comes from the mind of Steve Sprang, a solo iPhone app developer. The fact that one person created something so creative gives me confidence that there will be lots of useful apps created for the iPad itself. Apple is just getting started.

No one I talked to thought that they knew exactly what the killer app was. Peter Relan, chairman of iPhone social game platform maker Aurora Feint, said he believes the iPad will be a convergence device that you can use in your living room. But he added, “I think it impossible to outdo the iPhone. There is a lot of latent potential in this device, but it’s not so obvious what the real use will be.”