Despite having no smartglasses product, Apple ranked as the third most important smartglasses platform after Microsoft HoloLens and Magic Leap in a recent survey of AR/VR industry insiders by Digi-Capital and AWE. While this highlights Apple’s natural advantages and industry support, how does a company which hasn’t even hinted at a product rank higher than industry veterans like Google? 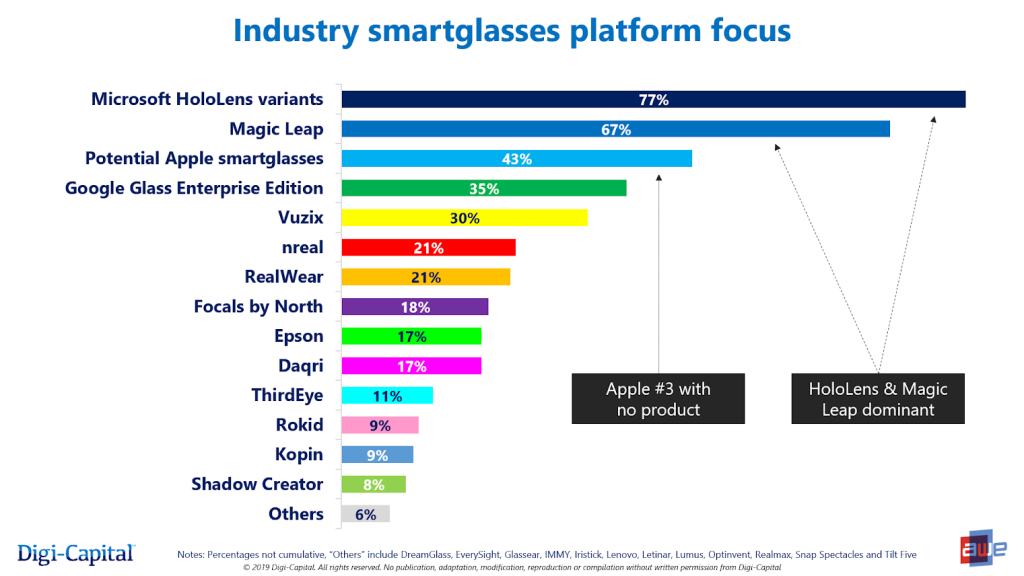 There are five challenges for consumer smartglasses to scale: hero device (i.e. an Apple quality device, whether made by Apple or someone else), all-day battery life, mobile connectivity, app ecosystem, and price. While hero device gets most attention (we’ll come back to it), two of the other challenges are non-trivial.

Until a major breakthrough in battery technology, a lightweight pair of standalone AR smartglasses doing heavy duty AR is hard to power all day without a battery pack or hot swappable batteries (fine for enterprise, a harder sell for consumers). And as history has shown, it’s a major risk for developers to invest in building apps for new platforms until installed base reaches scale. This is the chicken-and-egg problem of all new tech platforms.

Analyzing the five challenges in the context of Apple’s roadmap, Digi-Capital first forecast Apple launching smartphone-tethered smartglasses in late 2020 over three years ago. But while Apple remains sphinxlike, only Tim Cook and his inner circle really know if and when that could happen, and what it might look like.

If Apple smartglasses launch as a premium smartphone peripheral, not everyone is happy to pay for or carry two devices (e.g. Apple Watch). Apple could still sell several tens of millions of “Apple Glasses” to early-adopter consumers by 2023, which might also drive bring-your-own-device enterprise demand. Standalone smartglasses as a mass-consumer smartphone replacement look further out.

Smartglasses have largely been enterprise focused, with short-term installed bases in the tens of thousands (e.g., Vuzix, Google Glass Enterprise Edition) to hundreds of thousands (Microsoft HoloLens 2 with its 100,000 unit US Army contract). Digi-Capital forecasts enterprise smartglasses scaling to millions of users by 2023, driven by Microsoft, Google and a range of startups. Magic Leap is creator/developer (and enterprise) focused today, with its consumer play a medium-term prospect.

In that context, it isn’t surprising that Microsoft HoloLens and Magic Leap are seen by the industry as the most important smartglasses platforms today. But despite no Apple product in sight, the survey indicates that the company could be a serious contender if it chooses to enter. Viewing a potential Apple launch through the lens of smartglasses’ five challenges, it becomes easier to see why.

If anyone is going to launch Apple quality smartglasses, it’s Apple. Despite a narrative of the company being more evolutionary than revolutionary in recent years, Apple’s design track record remains a standout.

Unless Apple has a secret battery technology under wraps, smartphone-tethered smartglasses could be a practical solution to the battery challenge with current technology. Physically tethering smartglasses by wire might be better for battery life (two batteries across iPhone and Apple Glasses, plus no wireless comms between devices), but is inconsistent with Apple’s peripherals roadmap (e.g. Watch, AirPods). Apple could go down the wired path with its lightning connector, but wireless might see it favoring form over function.

Mobile connectivity is a non-issue if there is a tethered iPhone in the mix, unlike Wi-Fi-based HoloLens and Magic Leap. The impact of 5G when prevalent for AR Cloud (a 3D data layer for the real world) could become another factor.

ARKit installed base is set to approach three quarters of a billion devices this year, and top 800 million in 2020 (note: mobile AR installed base is compatible/configured devices, not active users — a lower number). But the challenge for mobile AR is critical use cases, to transform user experience in a way that users care about and that couldn’t be done any other way. Pokémon Go, messaging filters and Google Maps are a start, but more critical use cases are needed.

While use cases should continue to evolve, Apple Glasses could be supported at launch by a developer ecosystem with three years’ ARKit experience by late 2020. In some ways this explains Tim Cook and Apple’s relentless focus on ARKit since 2017. Digi-Capital analysis also shows ARKit average revenue per user (ARPU) is over twice Google’s ARCore ARPU, and ARCore has a smaller 400 million installed base today (not forecast to pass ARKit until 2021). Together with Apple’s integrated ecosystem, this could reduce developer concerns about investing in a new Apple peripheral platform after the relatively slow burn of Apple Watch.

Apple has years of pricing experience with iPhone peripherals, so Apple Glasses could launch as the most expensive Apple peripheral to date (i.e., more than Watch, less than iPhone). This could limit sales to innovators and early-adopters for 12-18 months following launch, with Apple following its typical pricing roadmap to attract early-majority consumers as the market develops.

Another advantage of a smartphone-tethered approach, if that’s how Apple rolls, is to reduce bill-of-materials costs compared to all-in-one (e.g., HoloLens) or breakout-box (e.g., Magic Leap) solutions by sharing the compute power with the iPhone. This is another of Apple’s natural advantages versus non-smartphone players, leaving the company with potential room to move on pricing. This advantage could also be shared by smartphone competitors (e.g., Samsung) if they launch similar products.

While it’s too early to tell for consumer smartglasses, enterprise smartglasses are already driving ROI for companies like Lockheed Martin. While this is encouraging for Microsoft, Magic Leap and other smartglasses players, another statistic from the survey could give them pause for thought.

Digi-Capital and AWE’s survey covers all major AR/VR platforms, not just smartglasses. The last survey in Q3 2018 was prior to Facebook announcing premium-standalone VR Oculus Quest, at a time when only the Oculus Santa Cruz prototype that preceded it had been revealed. That earlier prototype registered 41% support from the industry in the 2018 survey, which grew 1.5 times to 61% support for the Oculus Quest launch product this year.

Apple has already attracted 43% industry support for a smartglasses product about which it has said and revealed nothing. So it’s not unreasonable to speculate a larger relative uplift supporting Apple Glasses if and when it launches. While HoloLens inventor Alex Kipman and Magic Leap CEO Rony Abovitz should be happy about their industry support today, Apple could get a whole lot of love from the industry if it chooses to take them on.

Tim Merel is Managing Director and Isabelle Hierholtz is User Strategy Director of Silicon Valley AR/VR adviser Digi-Capital. Merel will be presenting more detail in his keynote at the world’s largest AR/VR conference and expo AWE 2019 in Santa Clara on May 29th.