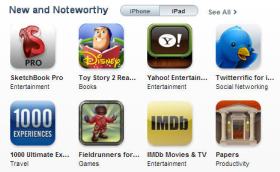 “So many apps!  Also: So expensive.” That was Gizmodo writer John Herrman’s instant response to Apple’s new iPad content now published in its online App Store.

The store has iPhone / iPad toggle buttons for its different sections. For now, it’s rigged so that the top apps are Apple’s own Pages, Numbers and Keynote, which most people don’t use.

Apple’s surprise launch caught most of the PR industry and tech media offguard. TechCrunch editor Mike Arrington pointed out that by making the story live now, Apple jumped the gun on hundreds of app makers who had been led to believe that their apps would stay under wraps until Saturday morning. Many had been preparing screenshots, videos and other press materials for delivery to journalists on Friday.

Now, it’s a scramble to get into the two-days-early articles and blog posts being written in a hurry by journalists caught off-guard. App makers are contacting VentureBeat and other publications in hopes of getting any sort of press coverage prior to Saturday for their apps. Here at VentureBeat, we’re planning an all-iPad roundup for tonight, but we’re avoiding a rush of hasty app writeups. We’ll cover iPad apps more when we can actually try them.