Apple’s iPad tablet dominance is crumbling. Strategy Analytics reported today that Apple is clinging to only 28.3 percent of the tablet market, down from 47.2 percent at the same point last year.

I guess that’s what resting on your laurels will do, Mr Cook.

In the last quarter, Apple’s iPad shipments slumped 14 percent even though the tablet market as a whole grew almost by half.

“When we add in white-box tablets, shipments reached 51.7 million units, up 43 percent from 36.1 million in Q2 2012,” Peter King, Strategy Analytics’ director of tablets said in a statement. “Apple iOS shipments were 14.6 million iPads in Q2 2013 which declined 14 percent annually.”

Dropping not just share but units in a rising market is a rare talent, usually reserved for failing companies. If a rising tide doesn’t lift your boat, perhaps you’ve got a hole in the hull.

But Apple’s senior leadership seems increasingly out of touch with reality.

CEO Tim Cook told analysts on Apple’s recent earnings call that iPad had majority browsing share, by far. CFO Peter Oppenheimer said that iPad was 88 percent of tablet activations in business. Both numbers are true, but the problem is that both numbers were U.S. focused, and the reality is that other countries exist, and many of them have mobile markets growing faster than the U.S.’s.

And Apple’s international sales are taking a big hit. 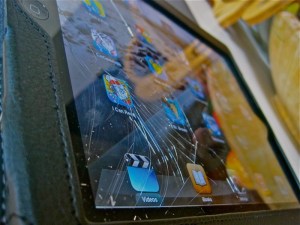 Oppenheimer blamed Apple’s iPad disaster — 14.6 million sold, compared to projections of 17.6 million — on excess channel inventory, saying that there was a 1.9 million unit swing in terms of iPads sales recorded this most recent quarter because that many were already in the channel (in other words, already counted as sold) from last quarter.

First of all, a 1.9 million unit swing only brings Apple’s numbers up to 16.5 million units, which is still lower than expectation. And secondly, that many extra units in the channel makes one wonder if Apple was channel stuffing — a practice it continually insinuates that core competitor Samsung engages in — during the previous quarter.

The real problem was lack of innovation.

Google just fixed that from the Android side four days ago. Apple, the next move is yours.

Apple’s coming products include a recently-confirmed cheaper iPhone. But maybe it’s time to start talking about cheaper iPads too.

Because Apple’s next steps will be critical for keeping iOS’ status as a leading global mobile ecosystem. Developers are already eyeing Microsoft’s Windows Phone platform as an up-and-comer.

Apple’s job is to keep it there, and also to try to win back some of the ground Android has gained on it.