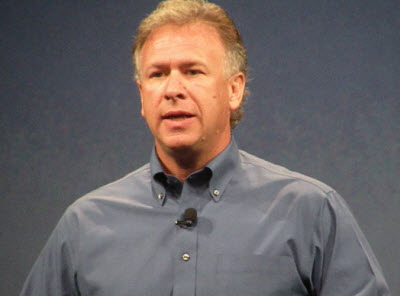 To date, he said Apple has sold more than 220 million iPods, including more than 20 million iPod Touches. Apple’s iPod now has 73.8 percent market share. Sandisk has 7.2 percent, and Microsoft has 1.1 percent, according to market researcher NPD. More than 50 percent are sold to first-time iPod purchasers.

Apple is now making iTunes version 9 available with a number of new features, including iTunes LP with a bunch of functions for old vinyl fans. Apple continues to make iTunes far easier to use, with better synchronization.

Schiller says the iPod Touch is also a great gaming machine. He notes the multitouch user interface is great, the games are cheap, the App Store allows for great choice of games, and the buying experience is easy. 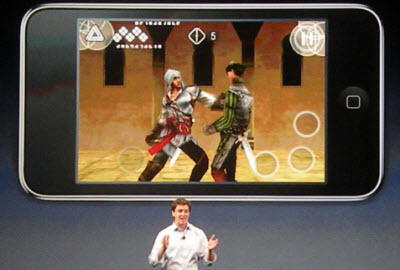 He noted the Sony PlayStation Portable has only 607 games available; the Nintendo DS has 3,680 titles, and the iPhone/iPod Touch have 21,178 games available now. He invited Ben Mattes of Ubisoft to come on stage to talk about Assassins Creed II for the iPhone. The game will be released Nov. 11, the same day as console versions are released.

Gameloft, meanwhile, has 20 million downloads of its 35 games on the App Store. Its new game for the iPhone is Nova, a sci-fi game with 12 levels, five weapons, a wide range of enemies and cool 3-D graphics.

Electronic Arts is today launching its Madden football franchise for the first time on the iPhone and iPod Touch.