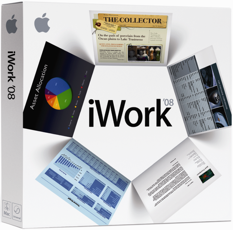 You can add another rumor to the list of possible announcements at next week’s MacWorld Expo. Apple’s office software bundled as iWork is about to become a suite of web applications, according 9to5Mac’s “best source.”

So far, I haven’t seen any other confirmation that this is happening, but it’s a move that makes sense. After all, even Microsoft, seen as the embodiment of traditional (and increasingly outdated) buy-the-box software, announced earlier this year it will be bringing Office online. There has been debate about exactly how many people use Google Docs — it’s certainly well behind the usage of Office, but it seems pretty clear that traffic is growing. Online office upstarts like Zoho are getting attention, too.

There aren’t many details about the features planned for the web-based version of iWork. It won’t just be a desktop application that stores your data in the cloud; you’ll actually interact with the applications (word processor Pages, spreadsheet software Numbers, and presentation maker Keynote) online. Microsoft says Office online will have fewer features than the desktop software, and Google Docs is pretty limited too, so if Apple releases a rich product it could make some real headway.