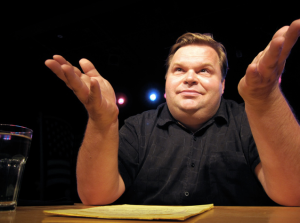 Apple released a statement to the press this morning about new labor condition audits it had asked for at Foxconn, the Cupertino company’s most infamous Chinese manufacturer.

Mike Daisey, an actor and monologist whose reporting and theatrical work has brought increased scrutiny to Apple’s labor practices, says the timing of the announcement is big news in and of itself.

“This isn’t new information,” Daisy told VentureBeat. “They talked about this work with the Fair Labor Association almost a month ago. But they buried it in a small note on a Friday before a holiday weekend. Doing this on a Monday morning with a big press release means they are reacting, because they see that their brand is in real danger.”

The specifics of the announcement are encouraging to Daisey. “They have gone from five percent of their supply chain being audited and the results being private to the entire supply chain and public reports, so that is progress,” he said.

But there is still a lot he would like to see improved. “These are announced inspections and, as I learned during my time in Chinese factories, those don’t work very well. They simply pull underage and overworked employees off the line when they know inspectors are coming.”

Apple’s rapidly expanding market cap, says Daisey, may be the key to progress on labor reform. “They have the resources right now to transform their supply chain. I know because I spent the last few years studying it. If Apple leads, other brands will follow. The pressure is clearly effecting them, so we just have to keep pushing.”

He is also waiting to see what these new reports look like before deciding how effective the additional audits might be. “Apple was lauded in the press for releasing their entire supply chain along with violations. But when you looked closely, that report didn’t show which suppliers were connected with which violation,” Daisey noted. “Apple is very good at PR, so I have learned to take everything they say with a healthy chunk of salt.”