A new Apple patent details how Siri, the company’s digital assistant, could use crowdsourcing to provide smarter, human-powered answers in the future. The patent, however, sounds almost exactly like what existing crowdsourced search engine ChaCha is doing today.

The patent, “Crowd Sourcing Information to Fulfill User Requests,” suggests that when Siri can’t adequately answer a question, Apple could turn to “one or more crowd sourcing information sources” to get a real live human answer — either in real-time, or one that has previously been generated in response to a similar question. 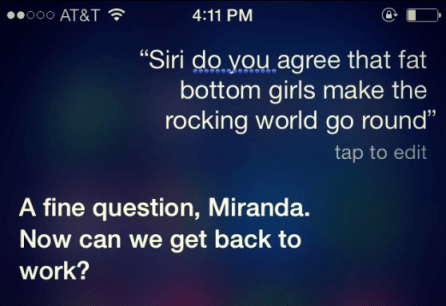 That’s pretty much what ChaCha does and has been doing for almost seven years. The company picked up a cool $14 million in venture funding earlier this year and now has almost $90 million in investments. It has already answered over 2.5 billion questions and has well over 130 million question-answer pairs in its database. ChaCha can also query users live for quick, custom answers and has been doing so for years.

ChaCha CEO Scott Jones doesn’t think much of Siri’s ability, saying that Apple’s personal assistant technology — which to date relies on a limited database of information, including Wikipedia — ranks below Google, WolframAlpha, Bing, and even Yahoo.

“If the metric is providing users with a high quality answer within seconds, Siri’s at the bottom of the list,” Jones told me this summer after Siri scored only 16.3 on an intelligence index test. “From my perspective, Siri needs to be able to answer the kind of questions that we ask when we’re driving or in the mall … the kinds of questions people really ask, as opposed to giving you search results, just like a search engine.”

That, of course, is the problem that Apple is attempting to fix.

Siri already has a certain level of understanding of what you’re actually saying — the meaning, not the words. In the patent, Apple details how it could start building a database of questions and human-generated responses, then answer questions that match existing pairs, using Siri’s ability to understand what you really want to know. In addition, Siri could access live human answers, or answers in online repositories, fan sites, or technical support forums, when automatically-generated answers aren’t sufficient.

That is really, really close to ChaCha, which, as mentioned above, already owns a very extensive — and perhaps the most extensive — database of questions and answers.

The reality is that Star Trek-style speaking and reasoning computer intelligence systems are incredibly hard to create.

“You need to be able to ask your own question, in your voice, and get an answer,” Jones told me. “Siri does well for things that are local to your phone for calendar, settings, brightness, but that’s very different than setting the expectation with people that you could ask it anything. Google Now is trying to do that too, but I don’t think they measure up very well either.”

It’s likely that ChaCha has patents of its own, and it’s also likely that Apple’s lawyers were very aware of ChaCha and similar search engines as they wrote this patent and were careful to make Apple’s claims unique.

One wonders, however, if an acquisition might not give Siri the intelligence it so desperately needs much quicker than attempting to duplicate work that has already been done.