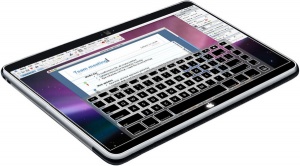 Reports that Apple is developing a tablet computer have been swirling for a while now, and any lingering doubts are looking more and more misplaced. Today, for example, Apple made an awfully suggestive re-hire — Michael Tchao, one of the developers of Apple’s first “tablet,” the Newton personal assistant.

Tchao has joined Apple as vice president of marketing, according to The New York Times, and will report to Senior Vice President Phil Schiller. Apple isn’t saying what Tchao will work on, and of course there could be many reasons for the hire. But it’s fun to imagine the company is bringing him so he can put his experience with the less-than-successful Newton to work by organizing a stellar launch for the tablet.

That tablet is one of those products that has been reported on so often that everyone kinda-sorta assumes it’s coming. The Wall Street Journal has published multiple articles saying that it’s a pet project of returning chief executive Steve Jobs, and Apple responds to those articles with vague, non-denial denials. That way it can keep the speculation flowing, and the tech press can fall over itself in paroxysms of excitement when Apple makes an “official” announcement.